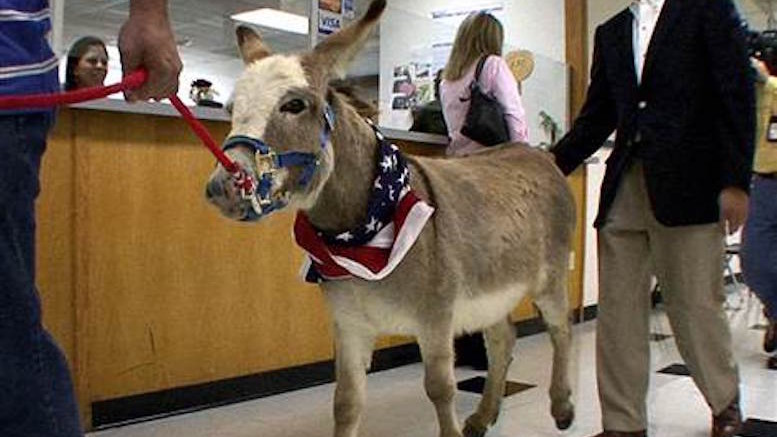 The Associated Press reported that the first witness called in a lawsuit between two Dallas neighbors “walked to the bench and stared at the jury.” This is not normally something you would encourage a witness to do, but in this case it was exactly what the party wanted.

The witness was Buddy, a donkey that belongs to attorney Gregory Shamoun. Shamoun was involved in a dispute with his neighbor, John Cantrell, who complained about a storage shed Shamoun was building in his backyard. Cantrell alleged that Shamoun then retaliated by bringing Buddy from his ranch and putting him in the backyard, to irritate Cantrell. “They bray a lot any time day or night,” Cantrell said.  “You never know when they’re going to cut loose.”

Shamoun decided on the risky tactic of actually bringing Buddy to court and letting the jurors hear, or not hear, from him directly. (Not since O.J. tried on the bloody glove has such a daring courtroom tactic been employed.) And Shamoun got away with it, apparently, since Buddy (who was more likely an “exhibit” than a “witness”) was described as “the picture of a gentle, well-mannered creature and not the loud, aggressive animal he had been accused of being.”

Nor did Exhibit A leave any Exhibit Bs behind on the courtroom floor, which probably also helped.

Shamoun’s claim was that Buddy was at his home not to irritate Cantrell, but to serve as a surrogate mother for a calf that needed to be bottle-fed. The article did not explain why the calf was there in the first place.

It is unclear whether Buddy’s courtroom demeanor carried the day, because the case settled while the jury was still deliberating. Shamoun agreed to buy some of Cantrell’s land, and Cantrell dropped his complaint.

I Bet That Finger Wasn’t Even Loaded

One Is a Beaver, the Other Is an Alligator