Defense attorneys and pro se defendants, you may want to add this to your short list of jury arguments to avoid: “Ladies and gentlemen of the jury, I’ll kill all of you.”

Also the closing argument, “That goes for your family, too.”

An aggressive strategy, but one that failed for Richard Glawson, who, surprisingly, was convicted in May by the jurors he had threatened to kill. Glawson faced several felony charges stemming from a 2001 crime spree. Representing himself at trial, Glawson closed by saying, “Ladies and gentlemen of the jury, I’ll kill all of you if you find me guilty of any one charge, and that goes for your family, too.” Glawson was later sentenced to 45 years in prison by the judge, who Glawson apparently forgot to threaten to murder. 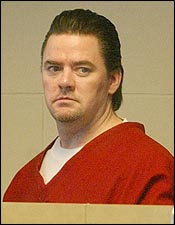 The jury-attack strategy is not a new one for Glawson, who was also indicted on intimidation and battery charges for actually punching a juror during a previous trial. He did succeed there in getting a mistrial, though, on the theory that his blatant juror-punching might have have prejudiced the other jurors against him. He did not have the opportunity to try this in the retrial, during which he was restrained.

Glawson was also charged with kicking a Superior Court officer in the head, which I guess for him would constitute thinking outside the box, and with “using restraints to break a window in the court cell where he made mosaic art out of two bologna and cheese sandwiches.”

One of my favorite Onion stories of all-time is “Jury Selection Proving Difficult in Trial of ‘The Jury Killer,'” but I never thought life would so closely imitate art.

What Do You Call An Album Released Solely to Extend Copyright Protection?

The Case of the Dangerous Dachshund