There's been lots of interest in the post the other day about the deposition conduct of Joe Francis, the "Girls Gone Wild" mogul who, it now seems, may have replaced Roy "Lost Pants" Pearson as the gift that keeps on giving to the legal-humor bloggers of the world.

Among other legal troubles, Francis is facing criminal tax-evasion charges for allegedly deducting millions in phony expenses, including some related to a home in Mexico called "Casa Aramara."  That case is set to go to trial in October.  Francis's legal team has, for some reason, filed copies of PowerPoint slides that it apparently intends to use in opening statement, according to The Smoking Gun, which published some of the slides this week.  Now, Mr. Francis may have plenty of perfectly valid defenses to the charges against him.  But a few of these slides might need to be rethought.

For example, the defense may be planning to argue that Mr. Francis cannot be guilty because he knows famous people: 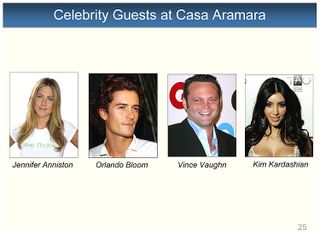 Maybe it is a good idea to circulate stuff like this ahead of time, so that people can offer helpful tips. Such as: it's Jennifer "Aniston."

Actually, that slide is number 25 in the presentation, so maybe we should look for the actual defense theme in an earlier slide.  This one appears to contend that Mr. Francis cannot be guilty because he makes lots of money: 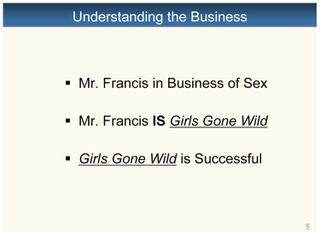 Hard to argue with that logic.  Or, maybe the real theme is revealed a few slides later: Mr. Francis should not go to jail because Hugh Hefner is not in jail: 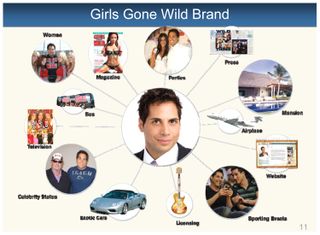 Thank you, and may God bless the United States of America.

Link: The Smoking Gun
Link: The Hater (at The Onion's A.V. Club)