Edward Ates "looked down and shook his head in court" as he listened to the jury's verdict against him on November 6.  As he did, his ponderous jowls wobbled slowly from side to side.  Or, at least, ponderous and wobbly jowls would have helped his defense.

Ates had been charged with killing Paul Duncsak, a 40-year-old executive who had formerly been married to the defendant's daughter, with whom Duncsak was locked in a bitter custody dispute.  Prosecutors alleged that Ates had driven from his home in Florida to Duncsak's home in New York, got inside, climbed a staircase and shot Duncsak six times when he got home from work, then immediately got back in his car and drove to his mother's home in Louisiana to try to establish an alibi.  But Ates' lawyer, Walter Lesnevich, argued that it could not have happened that way, because his client was so fat that he would not have had the energy to carry out such an elaborate plan. 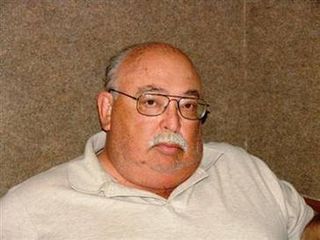 Ates reportedly weighed 285 pounds in 2006, when the crime took place.  That's heavy, but not heavy enough to preclude criminal activity.  I mean, there are plenty of football players heavier than that, and they commit crimes all the time.  When you get to the point that they have to take you out of your apartment with a crane, then you've got a believable fatness defense.

And it was not clear from this report what exactly the defendant argued he was too fat to do.  Surely he was not claiming to be too fat to drive.  How was he going to say he got to his mother's house?  Slung under a helicopter?  Was he too fat to walk up a flight of stairs, wait for a while, and then pull a trigger (six times)?  How many calories does that burn?  Too fat to flee slowly to his car and drive away?

Defense counsel may have assumed that it would be enough for jurors to just look at his fat client ("Look at him," he told the jurors), but this didn't pan out.  Assuming they looked, they apparently saw a man weighing only 225 pounds, because the report stated that Lesnevich made sure to note that his client "was 60 pounds heavier at the time of the crime."  So unless Ates was wearing a fat suit to simulate his earlier fat appearance, having the jurors stare at him was not likely to have the desired effect.

By the way, is it just me, or does "Too Fat to Kill" sound sort of like the next straight-to-DVD Steven Seagal movie?  Formerly, he was Hard to Kill, Marked for Death, Out for Justice, and so forth, although the last one I know of that made it to theaters was called Half Past Dead.  He has bulked up quite a bit, so maybe now Steven Seagal is . . . Too Fat to Kill.

The jury did not buy the defense, returning with a guilty verdict on the second day of deliberations.  Lesnevich said they would immediately appeal.  They'd better, since Ates seems to be getting slimmer and so less convincing all the time.

Felon Who Died in Tragic Fall Found Alive in Closet

Woman Won’t Have to Pay for Her Own Cavity Search