On Sunday, New York state senator Eric Adams announced the start of the latest campaign to raise the pants of America's youth.  Adams described the "Stop the Sag!" campaign as a major effort to fight what he called the "insidious spectacle" of sagging pants. 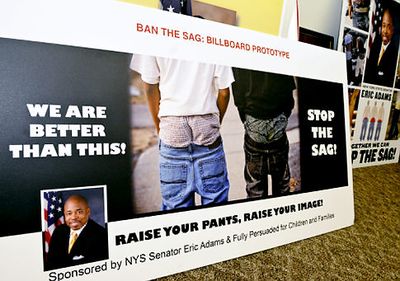 Adams said he had used $2,000 in campaign funds to pay for six 22-foot-tall billboards (see above) that were to be placed near heavily traveled streets in Brooklyn.  The billboards depict two young men with their waists at about the 12-foot mark and their pants riding about two feet below that.

"This whole sagging pants culture seems to have swept the city and the country," said Adams.  "Children will be children.  But as adults, we need to be on record and tell them they're doing something wrong."  Adams went on record via YouTube, in a video in which he said that youth who go around looking like "clowns" are contributing to their own racial stereotyping.  "We are better than this," Adams said, and called on the entire community to help.  "If we raise our pants," he said in the video, "we raise our image."

Frequent readers of Lowering the Bar will know this is by no means a new struggle, and that it is one that crosses color lines.  Battles in America's War on Sagging Pants have been fought to date in communities like Pine Lawn, Missouri; Riviera Beach, Florida; New Orleans, Louisiana; Lynwood, Illinois; Memphis, Tennessee; and perhaps most dramatically, Flint, Michigan, where then-Chief-of-Police David Dicks bravely crusaded against droopy pants at a time when Flint had the third-highest homicide rate in the nation.

The problem with those efforts, though, was that they tried to criminalize the problem, either by creating new and likely unconstitutional anti-sagging laws or (the Dicks strategy) trying to construe existing indecent-exposure laws to cover uncovered underpants.  By contrast, Sen. Adams has had the good sense to avoid that dead-end strategy and instead try to deal with the spectacle, insidious as it is, through persuasion.  And that, like high waistlines, is the American way.