Geisy Arruda, a 21-year-old Brazilian woman who was kicked out of her university for wearing a dress that officials considered "too short," has been awarded $23,600 in compensation by a local court.

Officials at Bandeirante University, a private school in Sao Paolo, expelled Arruda after her short red dress drew a crowd of other students who proceeded to jeer at her and insult her. These people, who evidently have never been to a Brazilian beach, or any beach, for that matter, and who I assume are all still living in their parents' basements, emerging only to squint at the sun, attend class, and camp out at the local video store to be the first to own Star Trek: The Next Generation Blu-Ray Edition in Portuguese, were sufficiently threatening that Ms. Arruda had to be escorted off campus (with a coat wrapped around her to hide her scandalous leg parts). The university then expelled her for causing a disturbance through "a flagrant lack of respect for ethical principles, academic dignity and morality." 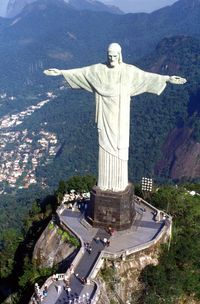 I Say Unto Thee, A Woman's Dress
Need Not Be As Long As Mine

A few weeks later, after public mockery and pressure from the Ministry of Education, the university let her back in. It still contended, in the media and in a lawsuit Arruda filed, that she had deliberately provoked the incident hoping to become famous. The court either disagreed, or didn't care, and awarded the woman an amount it said would compensate her without "endangering the financial health" of the university.

That last part suggests the court had considered awarding a lot more in jeering damages, but held back because the university might not be able to survive an award of more than $24,000. Arruda's attorneys certainly think there is more to be squeezed from the school – they immediately filed an appeal, arguing that $23,600 was nowhere near enough to compensate their client for her "trampled dignity."

As a result, just what the true dollar value of "dignity" might be, especially in a country (and state) in which voters just overwhelmingly elected an illiterate clown as their next Congressman, remains to be seen.