An Ohio man faces trial for “assaulting a police dog” now that a judge has rejected his argument that the law is unconstitutional. Ryan Stephens was arrested in Mason, Ohio, after he allegedly walked up to the window of a police cruiser and barked at a police dog inside. Stephens argued that prosecuting him for barking violated his First Amendment rights, but the judge rejected that argument this week.

The report says that the law was a municipal ordinance, and so it must be Section 525.16, Assaulting Police Dog, Horse or Assistance Dog. Stephens didn’t make contact with the dog (luckily for him), but the law also provides that no person shall “recklessly … [t]aunt, torment, or strike a police dog or horse ….” So this appears to be a dog-taunting prosecution. 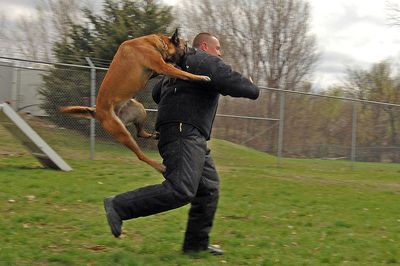 Another good reason not to taunt a police dog

Setting aside the question of whether law enforcement in Mason, Ohio, has anything better to do than prosecute somebody for barking at Timber the Police Dog, the judge was probably right to reject the First Amendment defense.

The first question is whether the law restricts speech or conduct. The line is actually not that clear, because the First Amendment also protects “expressive conduct.” The test is whether there was an “intent to convey a particularized message” and a likelihood that the message would be understood by the recipient. You certainly could communicate by barking — I’ve seen Lassie do it many times — but there’s no evidence that was happening here.

Second, if this was “speech,” we would then have to ask whether the law restricted it based on content. If so, the law would be presumed to be invalid, except that “fighting words” threatening imminent lawless action can be punished. If not, then it’s much easier for the government to justify.

In fact, the prosecution did argue that even if the barking was speech, it would then be “fighting words” because it upset Timber (although since he was apparently stuck inside the car, lawless action was not “imminent”). The judge does not seem to have reached that question, holding instead that in this case the barking was conduct, not speech, and that even if it was speech, the law was aimed at conduct and any “impairment of a First Amendment right is incidental.”

When he was arrested, Stephens reportedly contended that “the dog started it,” but he will apparently have to make that argument to a jury.

In similar news, we are still waiting for a decision from the Washington Supreme Court on whether Helen Immelt had the right to honk her car horn at a neighbor and a police officer, an offense she was convicted of in June 2009. That case, too, involved a First Amendment defense that was rejected on the grounds that “horn honking per se,” done to harass without the intent to convey a particularized message, was not protected speech. The case was argued some time ago, and I know you are anticipating the result as eagerly as I am.

The Latest on Your Homeland Security Dollars