Sooner or later, the Lujan Zoo in Argentina is going to get around to providing an excellent demonstration of how evolution works. This is not necessarily because the zoo does a good job of explaining the science behind it, but rather because they let people ride the animals. 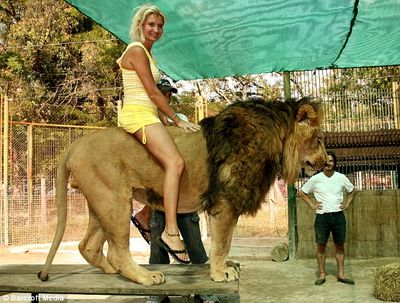 Good luck with that

"Here at the Lujan Zoo," reported the Daily Mail, "visitors can ride lions, cuddle bears, stroke tigers and feed cheetahs." A variety of other unique and perhaps irresistible though also shockingly dumb activities are also available, including picking up and holding the smaller animals or hand-feeding grapes to a grizzly bear. Yes, that says "hand-feeding grapes to a grizzly bear." I can only think of one other place you should expect to see that appear: 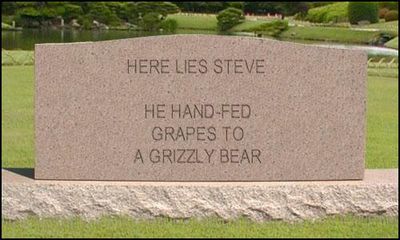 Not dangerous enough? According to another report, "if so inclined, [visitors can] follow the trainer's lead and allow the bears to snatch the grapes from between their lips." What could go wrong?

The zoo's manager "insisted the zoo takes stringent precautions to prevent accidents" although as you can see, it doesn't. The "precautions" turn out to be regular feedings "so they won't feel hungry when a human is inside their cage," and that the animals grow up around dogs. (Also, visitors are reportedly asked to make no "sudden movements," which is equally comforting.) He also noted that whenever a patron is inside a cage, there are always at least two zoo workers there as well (one is visible above), workers he referred to as "specially trained keepers" but who I would call "dessert."

To take advantage of this opportunity to be eaten alive, all you have to do is drive out from Buenos Aires, pay 50-100 pesos and, according to one report, sign "a paper that says the zoo [will] not be responsible for any accidents or deaths caused by the animals." Actually, I'm not sure there is such a "paper" — the zoo's website doesn't mention this issue at all, and the report that mentioned the grape-snatching said that "[a]ll of this … takes place without patrons being required to sign any legal waivers." Of course, at least under U.S. law, lion-riding or french-kissing a bear would pretty clearly fall in the categories of "primary assumption of risk" or "open and obvious danger," meaning one could not successfully sue if injured, waiver or no waiver. This is not to say people don't file, let's say, tiger-based lawsuits, but to my knowledge they don't win.

To be fair, the manager also claimed that, in fact, there have been no attacks since the zoo opened in 1994, and I could find no evidence of any, either directly or by inference from reports of increased bowel movements on the part of the big cats. If that's true, it certainly is some evidence (but not proof) that the zoo's techniques make this reasonably safe for visitors, as it claims. And by all means, if you want to do this or any other dangerous thing, I think you should be able to. Just please consider yourself adequately warned.

The zoo has been controversial for other reasons too. Many people don't like it because they think the treatment of the animals is abnormal and degrading, setting aside the risk to visitors. And some claim the animals are docile only because they're sedated, a claim the zoo denies. I don't have a position on that except to say before I tried to ride a tiger, at least one of us would have to be heavily sedated.

Oregon Says Its Laws Are Copyrighted, Can’t Be Published