Update: The Simolaris Incident was still infuriating people at this week’s board meeting, according to a more recent report by the Lowell Sun. Simolaris and town manager John Curran argued about who had committed the greater sin, and the forum also had “its fair share of outbursts from residents, one of whom was escorted out by a police officer.” Doesn’t seem like the kind of thing that should generate fury, but I guess we’ve all got to be furious about something.

As for whether Simolaris’s paint job was “useful” and/or safe, reader Dan the Former Traffic Engineer notes that traffic markings across the country are controlled by something called the Manual on Uniform Traffic Control Devices because they are, after all, supposed to be uniform. While I hadn’t heard of the MUTCD before Dan mentioned it, I am of course more than willing to glance at something briefly and then pose as an expert on that topic (not literally).

Under Section 3B.18, crosswalk lines “shall consist of solid white lines that mark the crosswalk.” As far as I can tell, neither the MUTCD nor any of the Massachusetts amendments to it say anything about  the part between the white lines, which I am guessing is what Simolaris painted based on the pre-washing picture below. If he painted the interior parts but didn’t mess with any of the white lines, then arguably he didn’t affect the existing “crosswalk markings” themselves at all. And if there’s nothing about what color the interior needs to be, then using green didn’t break an existing crosswalk rule, and greening the interior could not have made the existing crosswalks (such as they were) any less visible. 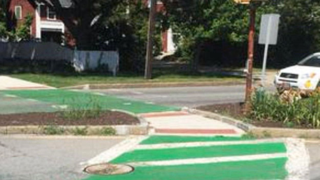 Now, it is very possible (seems likely, in fact) that there is some more general regulation prohibiting people from going out and exercising their creative impulses in a way that affects the appearance of a traffic-control device, especially if that makes it non-uniform. Also, several people pointed out that the “deck paint” Simolaris apparently used may not stick to the road very well (and one person has apparently claimed it got on her car) and could be more slippery than official paint under some circumstances. That is possible; I express no opinion on the nature of paint.

But in any event, as I should have pointed out previously, Simolaris has already agreed to pay the $4,200 it cost to remove his handiwork. I guess my real objection is to the board’s insistence that he resign over this dastardly deed, and especially to the decision to press criminal charges. Have him pay for it, and let’s move on to being furious about something really important. Something Kardashian- and/or Jenner-related, I assume.

Roadkill-Scavenging Soon to Be Legal in Illinois

“I Am Incompetent!” Lawyer Argues Unnecessarily