Saying his ex-wife Isa had always wanted a "big rock," Dany Lariviere of Montreal gave her one last weekend for her birthday. She will not be wearing it on her finger, though, because it weighs about 20 tons: 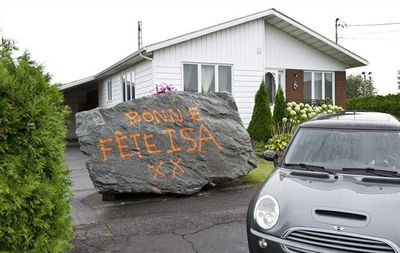 As you may have surmised, the two have not been getting along very well since they were divorced last year, after being married for ten years. Apparently they have continued to argue about financial and custody matters, and each has accused the other of harassment. From the report it's not really possible to tell who has the better argument there, although I guess Lariviere has now dropped off 20 tons of evidence that it's not him.

Lariviere, in addition to being the mayor of the small town where they live, also owns an excavation company and at least one quarry. He said he had used one of his own front-end loaders to cart the boulder through town early Saturday morning. He was stopped twice by police, but according to Lariviere he just "told them the truth – that I was delivering a gift," and they let him go on his way. Nothing illegal about moving a boulder, I guess. It's a free country.

Lariviere said on Monday that he would be willing to move the rock out of his ex-wife's driveway, but only if she promised to stop harassing him. Again, he is not in the best position to make demands given the fairly solid evidence of harassment on his part. I would like to see her retaliate in some equally comical way, but probably she'll just have him prosecuted. Time will tell, though.