It appears to be illegal to transport reindeer in your car, even in Norway, at least without special permission. According to this report (via Dave Barry), police in Lapland noticed antlers inside a Subaru Forester, and found three live reindeer in the back seat, with two more somehow fit into the luggage compartment. The ones in the back seat don’t look too uncomfortable, but I can’t imagine the others were enjoying the ride. The driver reportedly claimed he had received clearance from the Norwegian Food Safety Authority to transport five of his reindeer to another town about 60 miles away, from which I’m inferring that it’s otherwise illegal to do this. The report doesn’t say whether or not he told the NFSA exactly how he planned to transport the animals.

The same site also reports that the Norwegian Marketing Council recently upheld a ruling that beer makers cannot review or recommend beers on their own websites, link to other editorial material about beer or even show pictures of beer. The agencies involved were also not amused by this response from the Norwegian Brewery Association — 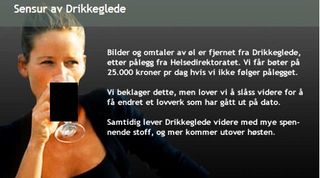 — and said it too was a violation. The association said it supports existing restrictions on alcohol advertising in general but thinks this is going too far, calling the website ban “surreal.”

Other stories at the site:

TSA Clears Self of Suspicion in Inspection Dispute