Despite the best efforts of the "West Virginia Belly Dancers for Single-Payer," who reportedly gyrated before the Supreme Court for approximately three hours this morning, a majority of justices voted to uphold the Affordable Care Act/Obamacare (whatever you want to call it). 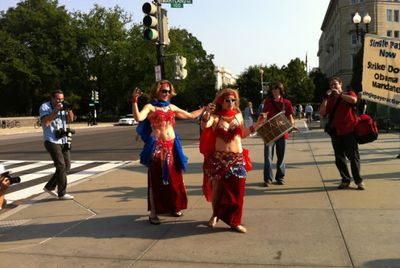 The belly dancers, whose trip to D.C. presumably left West Virginia dangerously short of such trained professionals, are in favor of universal coverage but oppose the mandate because they'd rather have a single-payer system. Their strategy did not succeed, of course, and may even have driven Justice Roberts into the opposing camp.

I have not actually read the opinion yet, but then neither have you, possibly because the slip opinion is 193 pages long. Luckily, there is a syllabus, from which we can learn that the Court held (1) the individual mandate is not within Congress's power under the Commerce Clause or the Necessary and Proper Clause; but (2) a statute should not be held unconstitutional unless there is no reasonable construction that would be constitutional; and (3) it is not unreasonable to construe the mandate provisions as a "tax" on people who don't buy insurance, and viewed that way the mandate is within Congress's power to tax. So, mandate upheld.

To learn all that, though, you would have to read all of the syllabus, or at least both pages describing the mandate holding. If you stopped at the first page, you would only have seen part (1) above and so would not know the mandate had been upheld on an alternative ground. Learning that would have required an actual turning of the page, something that both CNN and Fox News were in too big of a hurry to do (right) before rushing to declare the result.

Opponents of the mandate also rushed to Twitter without turning that second page:

I guess you could say the story was "still developing" at that time, it just developed in a way directly opposite to the way he thought it had already developed.