Here's how utterly ridiculous this story is. 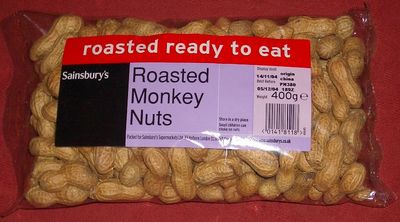 In the UK, unshelled peanuts are called "monkey nuts," as depicted here, but although this story therefore involves people being "warned not to eat roasted monkey nuts," THAT IS NOT GOOD ENOUGH BY COMPARISON TO MAKE IT INTO THE HEADLINE.

As noted at Overlawyered, this is by no means the first time this sort of thing has happened. But it never gets much easier to believe.

Last week, the E H Booths company announced (right) that it was withdrawing a number of packages of the aforementioned Roasted Monkey Nuts—which are peanuts—because it had learned to its dismay that "peanuts are not mentioned as an allergen on the back of [the] pack." That was true, but on the plus side the package did say "Roasted Monkey Nuts" on the front of the pack and was made partly of transparent plastic so that the monkey nuts could be seen inside the pack. (This is not an actual E H Booths package, but reports are that those are similarly transparent.) The actual peanuts could not be seen inside the peanut shells, of course, and this seems to have been the source of the public danger.

"If you have an allergy to peanuts," the alert continued, please do not consume this product [because it is peanuts]. No other products are affected by this issue [because those products would not be peanuts] and we sincerely apologise for the inconvenience caused." The alert has been posted in stores and also on the website of the UK's Food Standards Agency. The company was also said to be contacting the relevant allergy support organizations so they could tell their members about the problem. I would say, though, that if these organizations haven't already successfully educated their members on what the thing they are allergic to looks like, we should not rely on them as the first line of defense against the threat of unlabeled monkey nuts.

A commenter at Overlawyered pointed out, correctly, that despite the name and appearance, the peanut is not actually a nut. It's a goddamn legume, like beans and peas. (The regional term for peanuts in some parts of the American South is "goober peas," the "goober" part allegedly coming from nguba, the Bantu word for "peanut.") Fine, but that has nothing to do with this story. According to the BBC, "monkey nuts" just means unshelled peanuts, and so anyone with a peanut allergy is not going to be confused by this alleged nut/legume dichotomy. The real point of this paragraph, though, is to note that the Wikipedia entry on "Goober Peas," a traditional Southern folk song about peanuts, claims that the song is "frequently covered by pop singer Elton John during live shows," which has got to be complete bullshit. 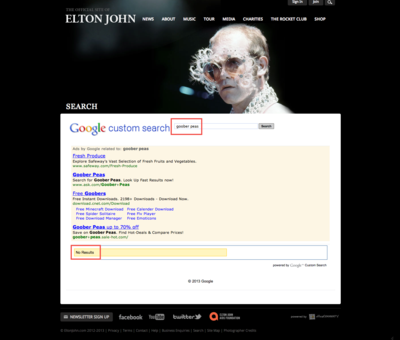 I'm not buyin' it

If you have ever actually witnessed Elton John covering "Goober Peas" in concert, please let me know at once. I may still need a bootleg of this before I'll be willing to believe it.

You Know, It Just Sends the Wrong Message When You Tase the Statue of Liberty

A Tort Causation Puzzler for You