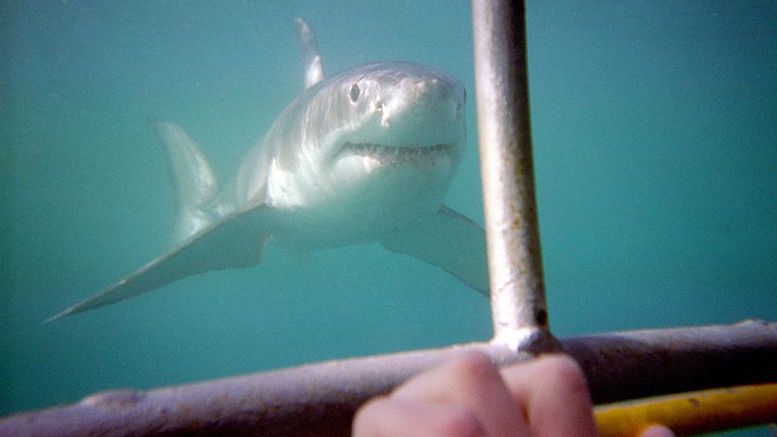 Um, is this where humans get in the ocean because they want to feed sharks? Did I hear that right? (image: Wikipedia)

Let me say up front that I know the risk of being attacked by a shark is extremely low. According to the Global Shark Attack File, in the history of the United States (well, the water near it) there have been fewer than 2100 shark attacks on humans, only 163 of which were fatal. That’s an average of only nine attacks a year, and most years none are fatal. Perspective: you are 20 times more likely to be killed by a cow. But shark attacks do happen, and they are terrifying, and so for people who, like me, suffer from sharkophobia, I offer this advice for drastically reducing the risk of being eaten by one: don’t get in the ocean with it.

This has worked great for me.

But people do get in the ocean, sometimes on purpose, and some do it knowing sharks are around. Some do it because sharks are around, and some are not inside a cage or other large metal object (like a submarine) at the time. In fact, there are people who feed sharks by hand. Seriously. They just jump in there where the sharks live and wave around something sharks like to eat. People even pay money to do this, or to be in the vicinity of someone who is doing it. Rarely, but unsurprisingly, one of those sharks will bite somebody. And then, more surprisingly, there may be a lawsuit.

There is at least one, anyway. Elke Specker is a filmmaker who specializes in underwater things. In June 2015, she went on an expedition with Mako Shark Diving, a San Diego company that advertises “cageless snorkeling/freediving shark trips, [led] by shark behavioral expert & shark feeder Michael Kazma.” Of course, anybody can be a “shark feeder,” or at least anybody who gets in the ocean can, but Kazma says he is a “professionally trained shark feeder” and dive instructor with years of experience. In fact, the website says he is “known globaly [sic] for his ability to attract and hand feed Mako sharks!” So if you are looking to go swimming with somebody known to attract sharks, here’s your chance.

Specker was, because she wanted to take pictures of them. But what she did not want, she says, was someone who would get drunk before diving and then hold shark bait near her. A shark bit her, and she is suing Kazma, his company, and their boat.

Yes, she’s suing a boat, but that may make sense in the field of admiralty and maritime law. That is a very specialized field about which I know nothing, but my guess is that Specker wants to bring her negligence claim in federal court and so needs a basis for federal jurisdiction. That’s what this order is about, in which the court holds that yes, it has admiralty jurisdiction because there is a connection between the incident and “maritime activity.” That wasn’t quite as obvious as it sounds, but you can read the order if you’re interested.

My interest is more in whether somebody who gets in the ocean with a guy who is known to attract sharks can sue that guy if a shark shows up and bites her. And as you may recall from our discussions of the “assumption of risk” doctrine, the answer is definitely maybe.

The doctrine recognizes there are things people like to do that are inherently dangerous, and if they could sue because they get hurt while doing them, those things might go away. Playing sports, for example. Watching some sports, like baseball, which involves the risk of being hit by a foul ball (but not necessarily a hot dog, see link above). In California, for a long time the doctrine only applied to sports, but in 2012 the California Supreme Court expanded it. Now it also applies to “other recreational activities” if they involve “an inherent risk of injury to voluntary participants where the risk cannot be eliminated without altering the fundamental nature of the activity.” If you get hurt doing one of those things—in that case, riding bumper cars—you can’t sue for negligence.

Unless somebody did something to “increase the risks … over and above those inherent” in the activity to begin with. Using exploding baseballs isn’t a great example, but I’m going to use it anyway because it’s late. If they used exploding baseballs, feel free to sue, but not just because you get hit with a regular one. If that possibility scares you, don’t go.

So, if you consider swimming in the open ocean near hungry sharks “recreational,” and apparently some do, the assumption-of-risk doctrine should apply. (Here’s a case involving shark handlers.) You can’t eliminate the risk of a shark attack without altering the fundamental nature of that activity, even if it is fundamentally dumb, and so you can’t sue if you get attacked. So, this was an easy one. Unless ….

Unless, as Specker alleges, the dive instructor had been drinking and this caused him to do things that increased the risks. She claims that because Kazma was drunk, he “negligently directed the divers … to an unsafe area,” and then held the bait “so that it led a shark directly toward [her].” It bit or slashed her on the leg.

Assuming all that’s true, I still think she has an uphill battle here. For example, I’m not sure how he could have increased the risks by negligently directing the divers to an “unsafe area.” It’s the ocean. I guess some parts of it are less safe than others, but since the point here was to get close to sharks while a guy hand-feeds them, I think that argument is a tough one. But if he did in fact taunt a shark so it swam right up to her, well, that  might be different. I suppose if you’re on safari and the guide throws a steak at you, you’d have a case.

Probably there are several ways to increase the risk of swimming with sharks. But as noted above, there is one sure way to reduce the risk to zero. That’s the real lesson here, I think.