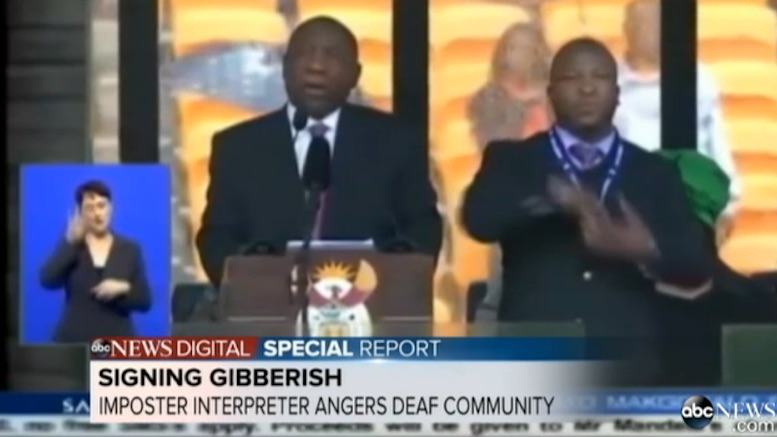 That's not what that means

This is pretty much off-topic, and I apologize for that, but this may be my favorite thing ever to happen on the planet: turns out the guy they thought was doing sign-language interpretation at the Mandela memorial was just making it up as he went along. 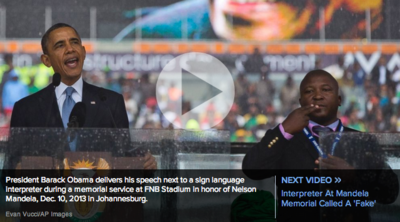 Whatever Obama was saying here, that ain’t the sign for it

People realized this during the service, of course, and immediately began to complain about the bogus interpreter on Twitter and elsewhere. “[T]he so-called interpreter on the stage with [South Africa’s deputy president] Cde Cyril [Rampaphosa] is not signing,” said Wilma Newhoudt, a deaf member of South Africa’s parliament. “He is just making [it] up. Get him out!” But nothing was done, and the man continued to gesture meaninglessly while standing not three feet away from Obama and other world leaders as they eulogized Mandela on Tuesday.

Sign-language experts confirmed to reporters that although the man was clearly mimicking sign language, his gestures didn’t mean anything at all:

He “was moving his hands around,” said one of the experts, “but there was no meaning in what he used his hands for.” He was just “waving his arms around meaninglessly,” said another. Yet another noted that when Rampaphosa mentioned former president F.W. de Klerk, “the man at his side used a strange pushing motion unknown in sign language that did not identify de Klerk or say anything about his presence.” It looked something like the sign for “running horse,” she said, if that sign were being made “by someone who signs terribly.” And that was as close as he got. A site in the UK added a real interpreter to the video, and the two sets of gestures were plainly nothing alike.

According to the ABC report, at the moment no one seems to know who the fake interpreter is, how he got the job, or whether anybody actually hired him at all or he maybe just walked into an event that included dozens of heads of state from around the world and decided to go up on the stage, stand next to the podium, and start pretending to do sign language. The best guess, though, seems to be that some African National Congress official involved in planning the event hired him, because according to the director of the Deaf Federation of South Africa, the same guy “interpreted” at an event last year that was attended by South Africa’s president. A deaf person in the audience videotaped that travesty and sent the video to the DFSA, which complained to the ANC. It never responded, and then there he was, waving his arms around during the Nelson Mandela tribute.

Lest somebody accuse me of disrespect for Nelson Mandela and/or his memorial ceremony, I should say that I think Mandela was one of the great human beings of the last couple of centuries. Nothing I say, and no strange pushing motion any fake sign-language interpreter might make, could affect that in the slightest. But there’s nothing I like better than an utterly ridiculous and seemingly inexplicable story, and this is certainly that. Who is that guy? How’d he get up there? What was going through his mind?

I kind of want to hear the explanations, but I also kind of hope we never find out.

Why Not to Slap Fellow Airline Passengers, Reason #1