The King County medical examiner's office said last week that although it had received three other sets of human bones, it still did not have an answer to its original question of who donated three human skulls to a Goodwill store in Bellevue earlier this month.

Or to the closely related question of why that person thought Goodwill would be the right place to drop off human remains. 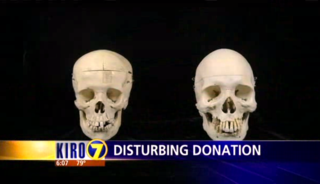 To be fair, Goodwill does not include human remains on the list of things it will and will not accept. It doesn't want animals or hazardous materials, but I wouldn't put a nice clean skull in either of those categories. It will accept "antiques and collectibles," "household items," and "toys," so those categories might have caused some confusion here, depending. But for future reference, Goodwill does not want your used skulls.

For further future reference, the place to take them, if they must be taken somewhere, would be the medical examiner's office. Under Washington law, "every person who knows of the existence and location of skeletal human remains"—which would appear to include you, guy with a human-skull paperweight—must notify the coroner and local law enforcement unless there is "good reason to believe such notice has already been given." This statute is likely meant to apply to skeletons you might come across in the woods, not the ones in your closet, but it seems broad enough to cover those too.

On the other hand, this statute provides that if you've had remains for 90 days or more, and the relatives of "or persons interested in" the deceased have not provided instructions, then the remains "may be disposed of by the person … having such lawful possession thereof, under and in accordance with rules adopted by the funeral and cemetery board …." I couldn't find those rules (not that I looked very hard), but the law also provides that any one performing such a disposition (except for cremated remains) must do so in a cemetery or church.

So that would seem to rule out Goodwill.

While it is a crime to dispose of remains improperly, authorities said they would not prosecute in this case in hopes of encouraging the skull donor to step forward. They do not suspect the donor of separating the skulls from their original owners—the two pictured above appear to have been used for medical/educational purposes, and a third was more than 100 years old. But that third one was said to be the skull of a Native American, which under state law must be returned to the tribe of origin. The promise of immunity is in hopes of getting further information so this could be done.

Again, as of last week the examiner's office said it had not received any information about the Goodwill skulls, but the publicity had prompted three other people to come forward with skeletons they apparently had hanging around. Police said none of those were considered relevant to a criminal case, either, but the report didn't give further details.

The Seattle Times quoted one official as saying that "people find themselves in possession of unwanted, or unknown, human remains more often than most people might think." Tell me about it—that's why I had to quit drinking. (Just kidding! I haven't quit drinking.) Although the Goodwill donation was something new, she said the medical examiner's office "has found remains sold at garage sales, for sale on Craigslist and even at estate sales."

Normally the decedent is not part of his own estate, but that can be arranged. [Update: another, more recent example (thanks, Mark).]

“The Huge Duck Scared Me,” Says Woman Ticketed for Failing to Yield to It

Tip: “BOOM SHAKALAKA” May Not Be Best Response to Contempt Petition

Can You Carpool With a Corporation?