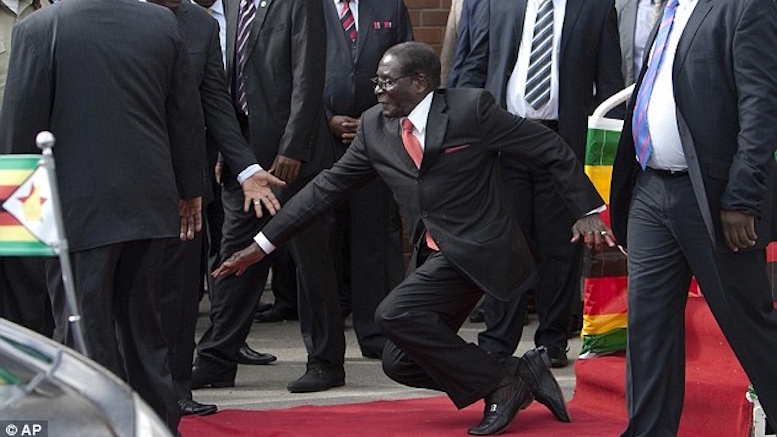 I think I'll remember him this way

This is a little off-topic, although political leaders are part of the legal system and so I have generally considered their antics to be within my jurisdiction and even if I didn’t I would mention this one anyway so who cares and let’s just get to it.

Zimbabwe’s “president for life,” Robert Mugabe, tripped and fell the other day as he was coming down some stairs at Harare Airport. At least, that’s how some tried to spin it:

Misleading still photos like the one up above provided even more fodder for disloyal elements and so-called “journalists” to claim the 91-year-old Mugabe had actually fallen down. Some of those “journalists” claim that the president’s security detail forced them to delete photos they had taken of the alleged fall, although as everyone knows the government of Zimbabwe is devoted to freedom of the press, open elections, and all other basic human rights, whatever the so-called “United Nations” may have to say about it, let alone legal bloggists. See, e.g., “Zimbabwe: Would Whoever Has Our List of Registered Voters Please Contact Us?” Lowering the Bar (Aug. 2, 2013).

Still, at least one of these photos survived and made it onto the internet, where the usual hooligans turned it into one of their despicable so-called “memes”: 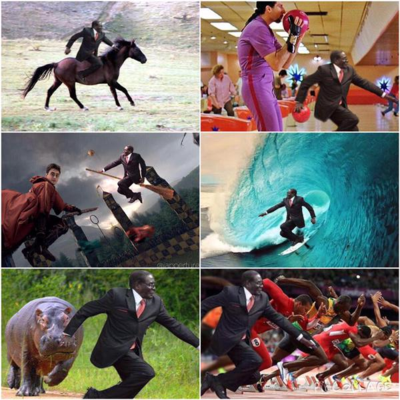 But all this was unfair and misleading, as the government-run newspaper made clear in its report. See “President in carpet mishap,” Zimbabwe Herald (Feb. 5, 2015). Not only is the beloved president hale and hearty, contrary to some suggestions, it reported, he did not even fall down:

PRESIDENT MUGABE yesterday tripped over a poorly laid-out carpet at Harare International Airport, but remarkably managed to break the fall before walking to his car, evidently unscathed.

The African Union chairman had just addressed thousands of jubilant party supporters who gathered to welcome him and celebrate his election as AU chairman.

Speaking off the cuff for slightly over 43 minutes following a four-hour flight from Addis Ababa, Ethiopia, where he spent a busy week chairing AU plenary meetings in addition to meeting African leaders, President Mugabe turned to leave the podium and was walking down a flight of steps when he tripped over.

Remarkably, the President broke the fall and landed on his knees….

Last night, the incident was attracting excited headlines around the world, with many linking it to his age and alleged poor health. Ironically just seconds earlier, the President had admonished the media for making issues out of non-issues.

A fairer and more balanced approach was taken by Information, Media and Broadcasting Services Minister Jonathan Moyo, who set the record straight:

“The misrepresentations and morbid celebrations of the incident by malcontents is the real news here and not the alleged fall as there was none [, the minister clarified].

Nobody has shown any evidence of the President having fallen down because that did not happen. The hump on which the President tripped was formed by two pieces of the carpet which apparently had not been laid out properly where they joined. And to be honest with you, even Jesus, let alone you, would have also tripped in that kind of situation. In the circumstances, there’s really nothing to write home about the nonsensical celebrations by malcontents who are imagining a fall that never was since it was actually broken by the President himself,” he said.

Finally, the Herald contrasted The Fall That Never Was with actual falls suffered by other world leaders. “This is not the first time a poorly laid out carpet has caused a head of state and/or government to stumble,” it pointed out.

Former United States President George Bush, missed a step while watching the Athens Olympics in 2008, and required the help of aides to stop him from an ignominious fall. Five years earlier, in 2003, Bush was left bruised after falling head-first from a Segway….

Queen Sofia of Spain, stumbled at the White House, with President Bill Clinton coming to the rescue, as she ascended steps during visit to Washington in 2000.

In 1975, US president Gerald Ford tumbled down the Air Force One stairs while visiting Austria.

These are just a few examples of high-profile incidents where leaders fell down with the stories hardly speculating about the health or ages of the people concerned.

Might have a point there. Some malcontents did make fun of said leaders at the time, but not due to their health or age. See, e.g., “New Documents Show Policeman Was Injured Last Summer by Falling President,” Lowering the Bar (Feb. 28, 2006).

I include the extended quotes here, despite my overall goal of making these posts shorter, because here they seem entirely worth it and also to show the Herald that its effort to “copy-protect” its webpages by making cutting and pasting impossible are a waste of time. Our advanced Western technology (that is, saving the text to a file) allows us to crack this at will.

ANOTHER REASON NOT TO USE ALL CAPS, NOT THAT YOU NEED MORE THAN ONE REASON