I now return to the critical project of covering the often-ridiculous official stuff of all 50 U.S. states, and, I have now decided, all our non-states as well. This time, it’s the District of Columbia. Although D.C. only has four official things (at most), each one deserves some explanation.

As you probably know if you don’t work for the TSA, the District of Columbia is a part of the United States although it is not itself a state (for some purposes). What is it exactly? Well … it’s a district. Um … it’s like a state, but not represented in Congress. Well, they have a representative but she doesn’t get to vote. What? Yes, they have to pay taxes. No, I see nothing incongruous about subjecting residents of the U.S. capital district to taxation without representation. Now, move along, please. Nothing to see here. 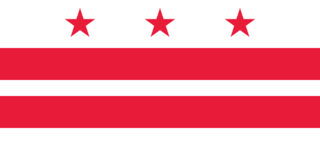 It’s nice. It is said to be modeled on the Washington family’s coat of arms, back when they lived in England, a place where they had a civil war once over the issue of taxation without representation (among other things). Speaking of which, D.C. passed a bill a while back that would have added the slogan “No Taxation Without Representation” to the flag, said slogan to be removed from said flag when D.C. voters “are able to vote for 2 Senators and one Representative with full rights and privileges in the Congress of the United States.” D.C. Code § 152(d). Evidently the mayor chickened out and wouldn’t approve it, so the act never took effect. It’s in the code, though.

D.C. did propose “No Taxation Without Representation” for the motto that would be on its quarter—you remember how all the states got one of those and could put whatever they wanted on it? Yeah, not happening, said the U.S. Mint. Too “controversial.” Man, bad enough that you aren’t a state and can’t vote, but then your quarter gets vetoed by the Mint? Depressing.

Also, at least for now they have let D.C. put the slogan on its license plates. So there is that.

In 1898, workers found a dinosaur bone when digging near 1st and F Streets SE, and gave it to the Smithsonian. It is only part of a vertebra and apparently does not fit any known species, and although somebody did give it a Latin name in 1911 (Creosaurus potens), the official scientific position is that it is “either an indeterminate theropod or some [other] form of saurischian dinosaur.” It remains in the Smithsonian Museum of Natural History today.

One hundred years after its discovery, some grade-schoolers decided that it would be cool if this dinosaur was called “Capitalsaurus” and was D.C.’s official dinosaur. The D.C. Council promptly caved, and the “Official Dinosaur Act of 1998” declared Capitalsaurus to be just that. See D.C. Code § 1-161.

Problem: at the time, there was no “Capitalsaurus.” There was a bone that might or might not belong to an Indeterminate Theropod, but whatever it was there was no dinosaur by that name. So, back to the drawing board. In this 2001 resolution, the D.C. Council formally named the Unknown Dinosaur “Capitalsaurus,” made it an official symbol, and decreed that the 100 block of F Street SE would be known as “Capitalsaurus Court.” I fully expected to find that the Council had totally blown off this last part, but I stand corrected: 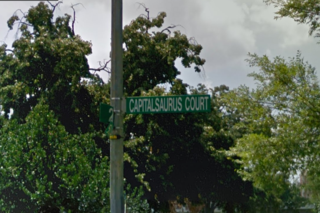 Problem: the D.C. Council is not exactly a recognized official scientific dinosaur-naming group. That might not bother you, but the the killjoy scientists over at the Smithsonian are clearly quite miffed about the whole thing:

The [1898 bone] consists only of the centrum (base) part of a vertebra of what is now considered to be either an indeterminate theropod, or some form of saurischian dinosaur. Unfortunately this specimen was used to try and name a new genus, “Capitalsaurus,” in honor of the nation’s capital. This is not scientifically justified and the name “Capitalsaurus” has no validity.

Oh, pooh. Well, sorry, kids. You can’t have the dinosaur, or the quarter, but you know what you can have? Taxation without representation. Ask your parents.

The statute that establishes this one (D.C. Code § 1-171) notes that the cherry is “symbolically associated” with George Washington because of the story about the cherry tree (a story that isn’t true, told to make a point about honesty), the Cherry Blossom Festival every spring, and the opinion of Mr. Bunton’s class at Bowen Elementary School.

As far as I can tell, nobody has shot this one down yet.

Have a Safe Workout