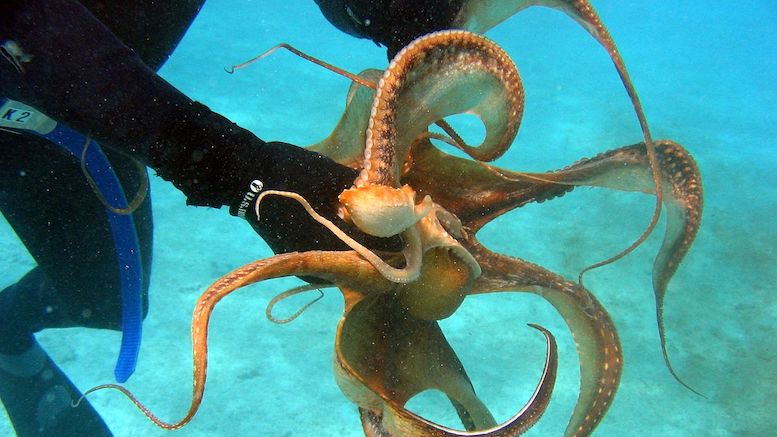 There's an honorary spine in there somewhere

Those of you who specialize in octopus law already know this, of course, but I just learned that at least in the European Union the octopus is treated as a vertebrate for certain legal purposes.

If knowing this doesn’t seem important to you, what are you doing here? Shouldn’t you be doing something billable?

Anyway, this has to do with laws that set certain conditions to protect animals that may be used in scientific research. It appears that these laws traditionally have only applied to vertebrates, probably because vertebrates have more highly developed nervous systems and so a greater ability to feel pain, emotions, and so forth, but probably also because invertebrates are way creepier. But octopuses are recognized as an exception, not to the creepiness thing but to the general principle that invertebrates are less intelligent.

The extent of octopus intelligence is debated, at least among vertebrates, but there is evidence of pretty complex behavior, up to and including possible tool use. See, e.g., J.K. Finn, T. Tregenza, and M.D. Norman, “Defensive tool use in a coconut-carrying octopus,” 19 Current Biology 1069 (2009). This evidence was enough to convince the UK to grant protection to the common octopus (Octopus vulgaris) in 1993, thus ironically granting it a certain elite status.

That discrimination ended in 2010, however, when the EU enacted a broader directive that let the other octopuses and even squid into the club:

I know some of you are thinking, wait a minute—what’s all this about cyclostomes? Well, I’m glad you asked.

According to Wikipedia, Cyclostomata is a group that includes the lamprey and the hagfish, which have round mouths instead of jaws. It looks like they got mentioned separately in the directive because there is a debate about whether the hagfish is really a “vertebrate” and whether the lamprey and hagfish belong in the same group. Although there is no debate about whether they are totally disgusting, which they absolutely are, the EU apparently decided to err on the side of protecting them anyway. I’d be willing to bet that if you wanted to take a hagfish out back and rough it up a little, this would not exactly make you Public Enemy No. 1 in the EU, if you know what I mean, but you didn’t hear that from me.

Animals that are covered by the directive can still be the subject of experiments, it’s just that there are restrictions on things like surgery without anesthesia, which I’d hope we can all agree is unnecessary and wrong, unless you are operating on a hagfish, in which case as your attorney I could not advise you to ignore the directive but otherwise I’m just sitting here quietly without expressing any sort of opinion on the matter.

I can’t say I’ve fully researched whether cephalopods have similar protection under US law (I’d certainly be willing to if you paid me), but it looks like invertebrate discrimination is still a thing in many states. Missouri’s animal-protection statutes, for example, apply only to “living vertebrates.” In other states, though, the definition is broader (e.g., New York: “every living creature”). I advise you therefore to look into the matter (or pay someone to do so) before hassling an animal, even for research purposes.

Same for the hagfish, although I may or may not be sitting here making air quotes right now.

Another Option for Keeping Control of Your Courtroom: Duct Tape

I’m Sorry, Doctor, But What Did You Say Your Name Was?