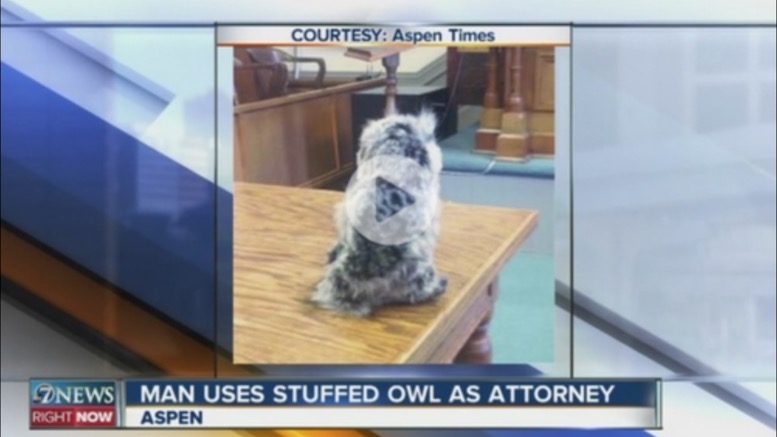 “MAN USES STUFFED OWL AS ATTORNEY” oversells the story a bit, but then so does my headline.

The Aspen Times reported on May 19 that a man who was accused of violating a protective order brought a stuffed owl along with him and suggested that it was going to act as his defense attorney. Referring to the owl as “Solomon,” presumably to suggest wisdom, Charles Abbott claimed that it had no fewer than three law degrees and was more responsive than a public defender was likely to be.

“He’s a very sensitive guy,” Abbott told the judge, “[and] has law degrees from Yale, Harvard, and Stanford.” He must be sensitive, if he’s willing to work for this guy despite presumably being at least half a million dollars in debt now after getting those degrees. It’s also frankly a little surprising that somebody smart enough to graduate from Yale, Harvard, and Stanford law schools wouldn’t also realize that he only needed a degree from one of them. But then he is a stuffed animal.

Despite his impressive credentials, the judge just ignored him.

The report says that Abbott is subject to a protective order intended to keep him away from his former roommate, and that he was arrested last weekend on suspicion of violating said order by going over to pick up some belongings. The roommate was out of town at the time, but the judge said that the order precluded Abbott from going to the house anyway, at least without a deputy present.

Solomon, meanwhile, just sat there like a potted plant and said nothing even when his client started to stray off-topic. Abbott claimed that his roommate had actually shown up in court wearing one of his shirts (“the blue one,” as he described it, which suggests to me that he only has two shirts), and then demanded that the Aspen Times reporter leave the courtroom because he—or maybe the Times?—engages in “yellow journalism.” Colorful, but not really helpful.

Meat Loaf Sues Over “Bat Out of Hell”