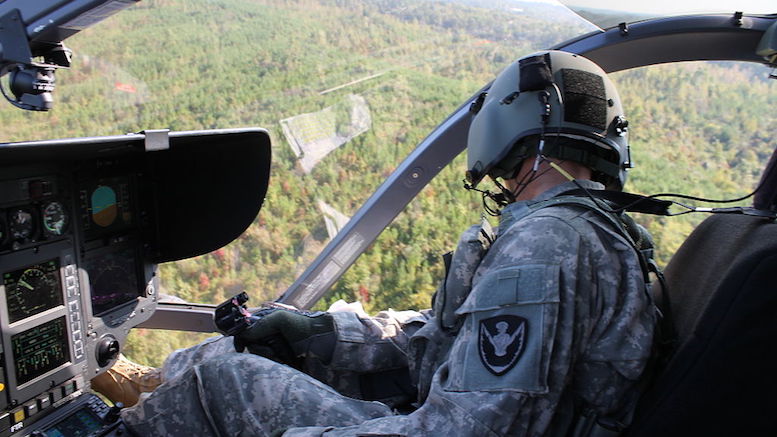 According to the Boston Globe, on September 7 several government vehicles and one helicopter descended on the property of 81-year-old Peg Holcomb as part of what a police spokesman described with a straight face as a marijuana “eradication operation.” In Holcomb’s case, they eradicated a single marijuana plant from her backyard.

The operation, the spokesman said, was a yearly exercise carried out jointly by the state police and the Massachusetts National Guard, made possible by a $60,000 grant from the Department of Justice. A total of 44 plants including Holcomb’s were seized during the operation, at a cost to taxpayers of $1,364 per plant.

On the other hand, authorities did get a chance to practice military operations against their own citizens, and that kind of training is priceless.

Holcomb wasn’t at home, but her son was. According to the report, he “asked the troopers if they had a warrant, and they implied there wouldn’t be any problems if they could take the plant right there and then.” I take it they didn’t have one, and that he may have consented in some sense to the seizure. But oh, was his mom pissed when she found out. “They hoped” there wouldn’t be any problems, she said later, but “then the 81-year-old grandmother stepped up.” She did not appear to feel any shame about her wanton violation of the nation’s drug laws: “I had been nursing this baby through a drought, and I was pretty pissed, to tell you the truth.”

Holcomb said she believed her constitutional rights had been violated. While not all the facts are clear, I think she’s right.

To begin with, police don’t need a warrant if someone consents to a search. (Never do this.) Even if you’re not home, someone else can consent to a search (tell them never to do this) if they have common authority over the premises, or even if they don’t but the police reasonably believe they do. Illinois v. Rodriguez (1990). Here, although the article doesn’t say, surely the son would have told them it wasn’t his house. If so, unless there are some facts showing they might have reasonably believed otherwise, his consent wouldn’t justify the search.

Taken literally, the report suggests that the troopers might have misled the son by responding to his warrant question by saying only, “there won’t be any problems if we can just take it now,” to the extent that implied they did have a warrant. As set forth in this handy summary by an instructor at the Federal Law Enforcement Training Center, an officer can lie about lots of things—including whether he or she is an officer (“Federal Express!” “Candygram!” “Landshark!”)—but can’t lie about the existence of a warrant in order to get consent.

Maybe because this is uncertain, it sounds like the government is asserting the “plain view” exception. Apparently, our heroes included a spotter whose job is to look for marijuana plants from the air, so that ground troops can be sent in to uproot the enemy. A spokesperson claimed that Holcomb’s plant was “growing outdoors in plain view.” Holcomb denied this, but if they didn’t spot it from the air it’s not clear how they would have known about it, unless somebody informed on her. Assuming they saw it from the air, will that work? I don’t think so. 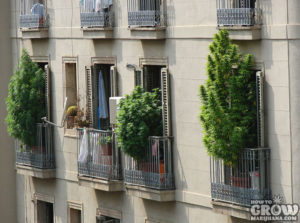 This would be probable cause, for example

The “plain view” doctrine says police don’t need a warrant to seize evidence if three requirements are met: they saw it from a lawful vantage point, its “incriminating character is immediately apparent,” and they have a lawful right of access to the object. Minnesota v. Dickerson (1993). “From the air” is usually a lawful vantage point, and a pot plant is incriminating evidence in Massachusetts (though maybe not for long). But I think the problem is the “lawful access” requirement. That is, just because police see something through your window doesn’t mean they can break into your house to get it. They’d have probable cause to get a warrant, but they’d have to go get one.

That is, unless some other exception to the warrant requirement applies. As you can see in this fun little dialogue I also found on the FLETC’s website, police don’t need a warrant if (for example) they’re in “hot pursuit,” if they have a reason to think the evidence might be destroyed, or if they can get consent. No reason to think the first two apply here, so if the consent wasn’t valid, then it seems to me that Holcomb’s Fourth Amendment rights were violated. I think she’d be off the hook, if they were planning to prosecute her, which they probably aren’t. Sadly, I don’t think she can get her plant back. But hey—it’s not like it’ll be hard to get another one.

Especially because on Tuesday, Massachusetts voters will decide whether to legalize pot for recreational use. Four U.S. states have already done that, apparently without descending into chaos, and polls suggest Massachusetts will do it too (in the most recent poll “yes” is leading by 27 points). Under the Massachusetts provision, Granny Holcomb could have up to six plants in her backyard.

The feds might still call in an airstrike, but the state troopers will have to find another hobby.

The Odd Clauses: All About the Constitution’s “Crazy Uncles”

Felon Who Died in Tragic Fall Found Alive in Closet

Counter-Petition Asks to Deport People Who Signed Other Petitions