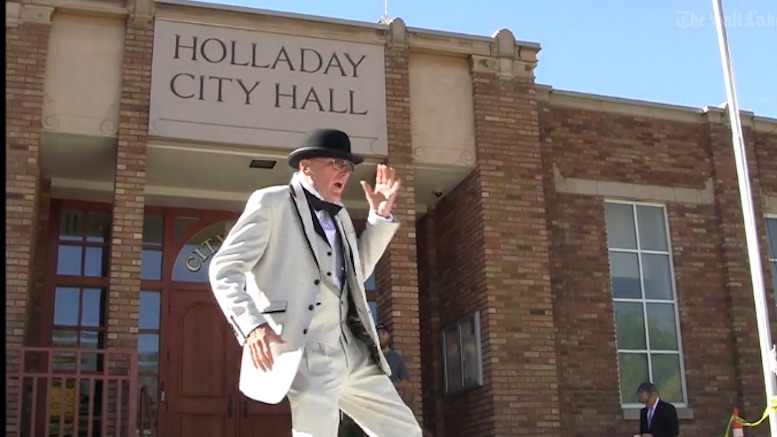 Steven Unger is known in the community “as a dancing, waving, happy man,” this report says.

In other words, he looks suspicious.

Well, not to people in his own community of Holladay, Utah, apparently. According to KUTV in Salt Lake, those people are willing to tolerate the following: 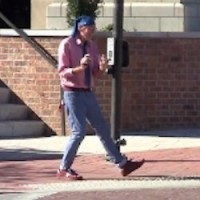 Nearly every day, the 68-year-old retiree dons selections from his brightly colored wardrobe, ties a bandana around his clean-shaven head, throws on the ear buds, plugs into his smart phone packed with tunes, and heads outdoors.

He walks and dances up to 10 miles, a can’t-miss figure, sometimes bouncing a rubber ball as he “glides” along streets, avenues and lanes.

And he gets away with this in Holladay, where “[k]ids from the local junior high say hello, and passersby in cars and SUVs wave.” But in August, he finally went too far. 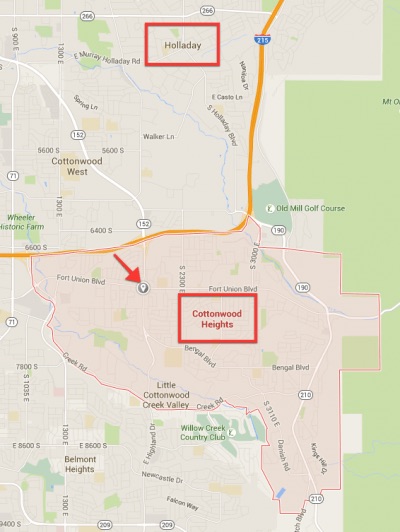 By crossing under I-215, that is, which is the border between Holladay and neighboring Cottonwood Heights. There, near Highland Drive and Fort Union, a good citizen called police.

Who, to their credit, did not just shoot him dead. (Let’s be honest—the bar is pretty low these days.) But to their discredit, they did hassle him and demand that he show identification. He declined to do so, and was arrested for—wait for it—disorderly conduct, failure to identify himself, and interfering with an arresting officer. He was indicted, or arraigned, or whatever they call it there, a few days ago, and has a court date on November 18.

Let us discuss these charges for a moment.

The reports all suggest that either the caller or the police may have claimed that Unger left the sidewalk and was obstructing traffic. I’m going to speculate that this is bullshit, because (1) the reports are equivocal (i.e., he was “possibly jumping in front of traffic” or “appeared to be distracting motorists”), and (2) they didn’t charge him with jaywalking. Maybe the “disorderly conduct” charge encompasses that (it often seems to encompass everything else), but I’m just not buying the suggestion that he was literally Dancing in the Street. If I’m right about that, then the disorderly conduct charge is nonsense. He doesn’t seem to have resisted arrest, though he did try to walk away, so I’m not buying the “interference” charge either.

So how about failure to identify? Well, people often think that it is illegal or unconstitutional for the police to demand that you identify yourself. Not necessarily.

In 2004, the Brethren and Sistren held 5-4 that at least in some circumstances, a law requiring you to do this doesn’t violate the Fourth Amendment. But, critically, the initial stop must have been justified under Terry v. Ohio, which makes it legal for an officer to detain you briefly if the facts justify a reasonable suspicion of criminal activity. That is, a cop can always ask someone a question, just like anyone else can. But you don’t have to answer and can just walk away—though that might not be a good idea. If under the circumstances you’re not in fact free to leave, then the Fourth Amendment applies. But if Terry is satisfied, then it wouldn’t be unconstitutional for an officer to demand ID.

That doesn’t mean it’s illegal to refuse, it just means a state could make it illegal as long as its law conformed to the above. And surprise, Utah is one of the states that has a “stop-and-identify” statute:

77-7-15.  Authority of peace officer to stop and question suspect — Grounds.
A peace officer may stop any person in a public place when he has a reasonable suspicion to believe he has committed or is in the act of committing or is attempting to commit a public offense and may demand his name, address and an explanation of his actions.

This law goes beyond the name requirement that was at issue in the 2004 case mentioned above, and I don’t know whether that’s valid. (This might be a good time to remind you to read my disclaimer.) But it does require reasonable suspicion of criminal activity, assuming that’s what “public offense” means. If that doesn’t exist, then the officer doesn’t have the authority to “demand” anything.

That was a fairly long way of saying that in Unger’s case the failure-to-identify charge was probably bogus because dancing on the sidewalk isn’t a crime.

For now, though, he is still charged with it, because the judge refused to dismiss the charges at the court appearance on October 14. Quite a few people showed up to support him, which might have been because the district courthouse is in Holladay, not Cottonwood Heights (the towns have separate police forces but apparently are in the same judicial district).

As you can see from the picture at the top of this post, Unger has not been deterred by the charges one bit, and immediately went back to threatening the community by dancing on the sidewalk in front of the courthouse/city hall. In a bowler hat, no less. Does the man have no shame?

For Christmas, Your Government Will Explain Why It’s Legal to Kill You

Plaintiff in Deming Case Was Held for 15 Hours [Updated]