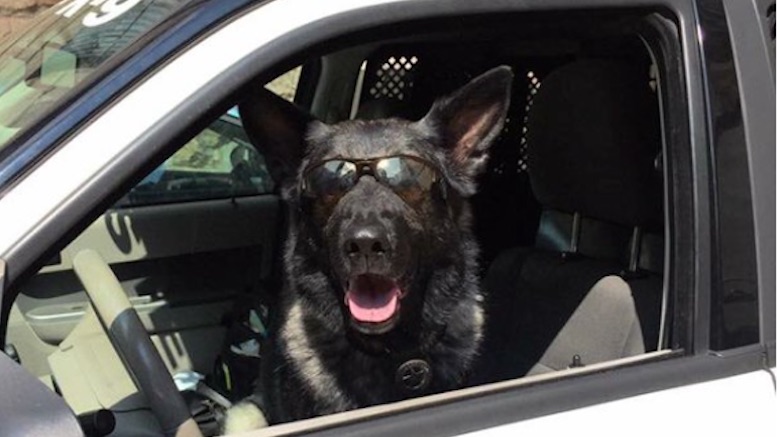 The alleged tauntee (photo by Marcie Cipriani of WTAE)

Normally I wouldn’t speak up on behalf of an Oakland Raiders player. Or the Raiders organization. Or Oakland. But I like trumped-up pointless criminal charges even less than I like the Raiders, so that explains this post.

As the headline says, these are possible dog-taunting charges, not dog-fighting or dog-abuse charges like the ones that put Michael Vick in jail for not enough time. (Vick, somewhat ironically, is now a Steeler.) Police in Pittsburgh claim that Raiders linebacker Ray-Ray Armstrong, who is already under investigation for having two first names, taunted a police dog before the game with the Steelers on Sunday. According to sources, Armstrong “lifted up his shirt, beat his chest, and started barking and yelling at the K-9 before the start of the game.” The dog, which probably also doesn’t like the Raiders much to begin with, had to be restrained. Or, as a spokesperson for the Allegheny County Sheriff’s Office put it, “the dog immediately responded and tried to make its way over to the player,” which sort of makes it sound like this was a tail-wagging, who’s-a-good-boy-yes-you-are sort of encounter and not one where the dog wanted to eat him.

As in most states, it is in fact a crime in Pennsylvania to mess with a police animal. Specifically, it is a third-degree felony to “willfully or maliciously taunt, torment, tease, beat, kick or strike a police animal,” which is a pretty broad range of conduct all squeezed in under the same felony category. No animal should be hit or abused, but the question here is whether barking at a police dog as you run past, as Armstrong was apparently doing on his way to the field, is something the state should even be bothering with.

Seems unlikely they will actually charge Armstrong with this, but at press time they had not made a decision. Since the number of homicides in the area this year is at a near-record level, it might be taking them a little longer than usual to evaluate this dog-taunting charge.

One Wounded in Man-Bat Fracas