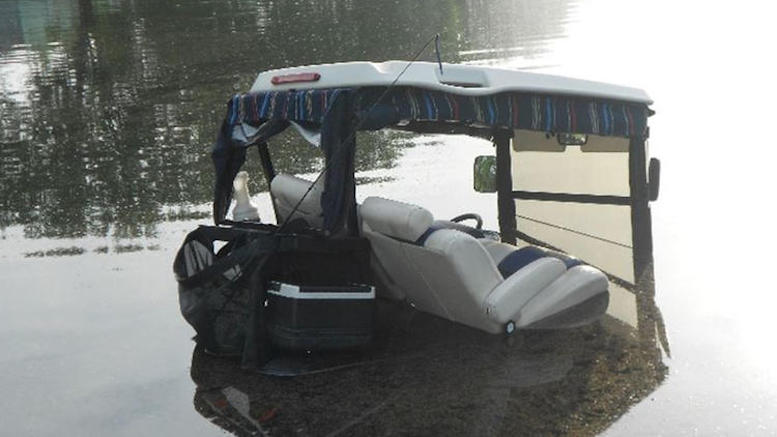 Exhibit A (image: Lady Lake PD via the Orlando Sentinel)

As I’ve pointed out several times now, lakes and ponds are just not a good option if you’re trying to flee and/or hide from the authorities. Police generally have better transportation options than you do, you can’t stay in the water forever, and there may be things in the water you should be more afraid of.  In most of these cases, though, police were in reasonably hot pursuit of the suspect, who thus presumably had to make a snap decision among a limited number of bad options.

This guy just drove into a pond.

Details unfortunately are few, but reports agree (Orlando Sentinel, Daily Commercial) that the getaway, such as it was, had been completed before police arrived. Someone apparently called them to report a golf cart partially submerged in a pond near Silver Oak Avenue in the town of Lady Lake, Florida. (I’m assuming someone called in the golf-cart sighting, although one report says police “responded to a pond” and the other says they “responded to a golf cart,” and I suppose it’s possible that one of those things is set up to automatically summon help in a crisis.) When they got there at 7 a.m. last Friday, the cart was as you see it above, and its driver, if any, was nowhere to be found. 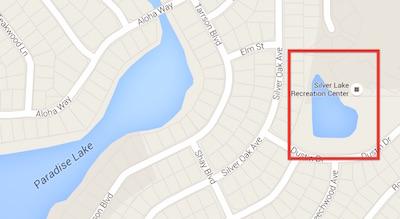 There are only two bodies of water near Silver Oak Avenue, and one is a lake. Therefore, the pond is likely as indicated.

But careful investigation led police to a nearby house, and by “careful investigation” I mean they followed the golf-cart tracks that led from the pond to the house. This house had been burgled, or showed signs of forced entry, at least (but I like the word “burgled”). The owners were out of town, and police surmised that someone had burgled the home and used the golf-cart, post-burgling, to carry off burgled items.

But where could that someone be?

Let me pause here to reiterate my frustration over the lack of details in an important story of this kind, which has made it difficult to identify the precise body of water involved. The Sentinel says the house “backs up to the pond” where the cart was found. That, plus the name “Paradise Lake,” strongly suggests that the “pond” was as indicated above.

But as you can see on the satellite image below, the building next to that (unlabeled) body of water is called “Silver Lake Recreation Center.” As there is no “Silver Lake” nearby, we have to accept the possibility that the locals refer to that as a “lake” although it is clearly a “pond.” Also, Silver Oak Avenue actually stretches around to cross “Paradise Lake,” so it is not impossible that a house on Silver Oak Avenue backs up to that body of water, and that the latter was mistakenly referred to as a “pond” by people who apparently don’t know the difference.

That may not seem likely, but here are two further details that were provided: (1) the cart tracks led to the front of the house, not the back; and (2) the suspect, it turns out, lives on “Debra Drive,” which is in the other direction on the far side of “Paradise Lake.” So if he was fleeing with burgled items from the front of the house, why head in the opposite direction? 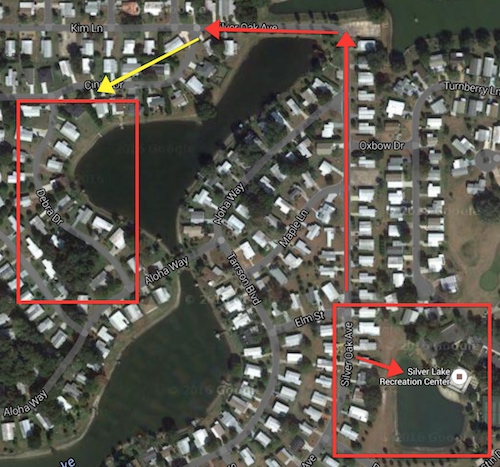 I realize the answer is probably “because he was drunk,” which would also explain how he ended up half-submerged. But I like mysteries.

The real mystery, though, may be why he used his own golf cart. Because that’s apparently what he did, as opposed to stealing one from the nearby golf course, for example. According to the reports, detectives were able to determine that the golf cart’s owner was a 46-year-old man who lives on the aforementioned Debra Drive. While he might have just left some ID in the cart, the reports suggest it was the cart itself (registered in his name?) that enabled detectives to crack the case. Either way, this was stupid.

According to the Daily Commercial, detectives arrived at the man’s home to find “a television set stolen from the Silver Oak Avenue residence [and somehow lugged home sans cart], a set of keys to the home, and wet clothing.” Which, despite the many unanswered questions that remain, seems like probable cause to me.

If a Tree Falls in the Forest ….