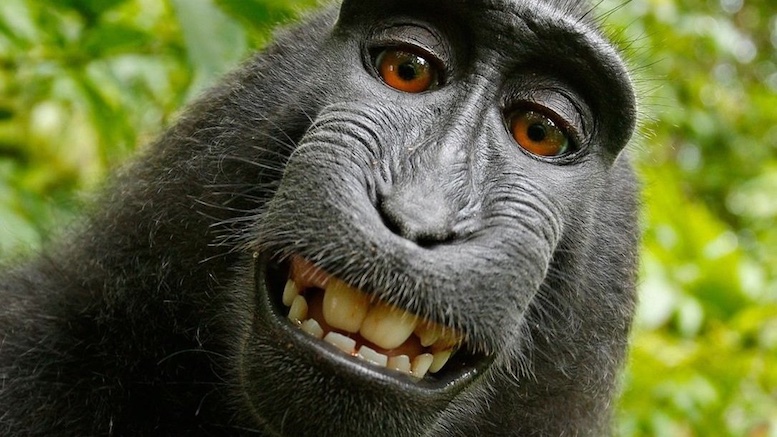 To be fair to the monkey, he didn’t know anything about the battle, let alone copyright law, and it’s not all that clear he knew what he was doing when he took the picture in the first place. So when I say he “lost” the battle, what I really mean is that People for the Ethical Treatment of Animals lost the battle it was sort of fighting on his behalf.

As you probably recall, the picture above was taken in Indonesia by Naruto, a crested macaque, using a camera that nature photographer David Slater had briefly left unattended. Since it is obviously a remarkable picture, it got lots of attention. (I’m going to leave the backstory at that, assuming that the “related posts” function will correctly come up with links to my more elaborate past discussions of the matter. If it doesn’t, the related-post gnomes will be terminated and the function will be outsourced.)

The primary question has been whether Slater has a copyright in the image (since he technically didn’t create it) or it’s in the public domain. But last year PETA sued Slater and two corporations, purporting to act on the monkey’s behalf and in defense of his copyright claim. See Naruto, a Crested Macaque, by and through his Next Friends, People for the Ethical Treatment of Animals, Inc., et al. v. David John Slater, et al., No. 15-cv-4324-WHO (N.D. Cal. filed Sept. 21, 2015). Slater’s attorney filed a brief and entertaining motion to dismiss that began, “A monkey, an animal-rights organization and a primatologist walk into federal court …. What seems like the setup for a punchline is really happening,” and noted that “[t]he only pertinent fact in this case is that Plaintiff is a monkey suing for copyright infringement.”

NPR reports that Judge William Orrick said during the hearing yesterday that the monkey and his next friends were probably out of luck. There is no written order yet, but the minute order for the hearing says this:

The Court announces the tentative opinion, in line with the Ninth Circuit’s opinion in Cetacean Community v Bush, that while Congress and the President can extend the protection of law to animals as well as humans, there is no indication that they did so in the Copyright Act. The Copyright Office’s Compendium is consistent with the Court’s understanding. Oral argument heard concerning the motion to dismiss. Motion taken under submission; written order to follow.

It is very likely that tentative opinion will also be the final one.

Happily, the AP reports that PETA’s general counsel “said the organization will continue fighting for the monkey’s rights.”

North Carolina Would Like to Opt Out of the Supremacy Clause