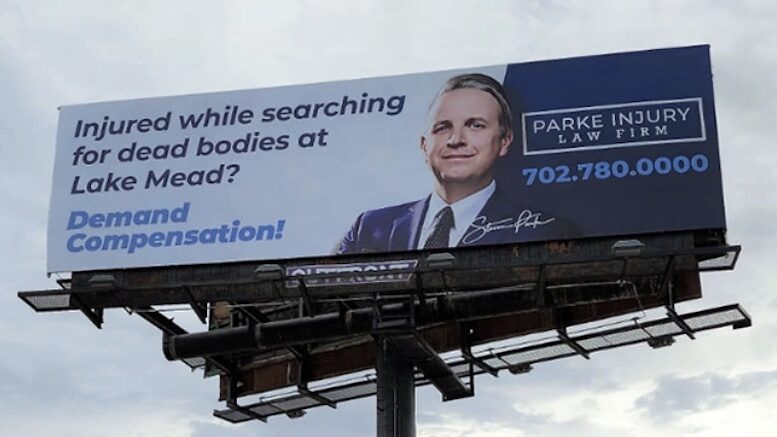 Careful who you sue, though (image: KLAS News)

According to KLAS News, the attorney who put up this billboard concedes that “not all the feedback has been positive.” But those people don’t understand irony, says Steven Parke, who operates the Parke Injury Law Firm in Las Vegas.

To those people, he said, it “confirms every suspicion they have about attorneys, which is look at this guy, he’s going after the last shred of dignity here. He’s chasing every buck he can. He’s the Saul Goodman of Las Vegas. And the joke is kind of on them because that was kind of the point.”

Had they had stopped to think about it for a second, they’d probably have realized that the lawyer could not possibly have meant this to be taken literally. “Demand compensation”? Who from?

Obviously the reference is to the otherwise grim news that as the water level in Lake Mead drops because of the persistent drought—it’s now at 27% of capacity, the lowest it’s ever been—it’s uncovering some unpleasant things, including (so far) four sets of human remains. To date these have been found by accident, not because people have gone out looking for them. But if you did that, and got injured, finding someone to sue would be difficult.

The drought would be responsible for creating the attractive nuisance (although that’s probably not the right term) by dropping the water line, and droughts don’t have any money. The people who probably put at least one of those bodies in Lake Mead have lots of money, but unless you want to end up in Lake Mead yourself (or someplace deeper) I wouldn’t advise suing them. And in any event, this seems like a situation where the assumption-of-risk doctrine would apply, so you’d likely get nothing if you did find someone to sue. See, e.g., Man Who Wanted “Full-Contact Experience” With Leopard Sues After Getting One (Oct. 30, 2020); Man Burned at Burning Man Assumed Risk of Being Burned by Burning Man, Says Court (July 2, 2009).

Parke does not seem to have thought it through to that extent, which I guess isn’t surprising. Could someone demand compensation for such an injury, the reporter asked? “You possibly could,” Parke responded. “But as any attorney would tell you, it depends.” Well, not any attorney, because this one right here is telling you no. But maybe that’s just because I’m on the defense side? (No.) “I hope you don’t go out searching for a dead body,” Parke was careful to add, “but if you do, I guess you’re taking your chances.” (Yes, you are assuming the risk.)

Parke’s advertising has also included billboards featuring quotes by Mike Tyson (“Everyone has a plan until they get punched in the face”) and Vanilla Ice (“If you have a problem, yo, I’ll solve it”).

Update: The Paddlefish Defendants Are Now for Sale

Judge Rules Burrito Is Not Sandwich