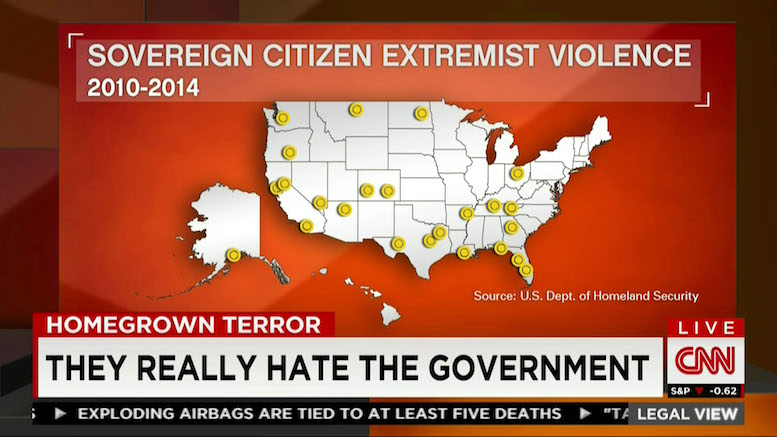 They really do (image: CNN, referring to a prior incident)

Let me start by saying that while it was going on, I didn’t pay much attention to the Bundy-led occupation of the Malheur National Wildlife Refuge in Oregon. I knew it was happening and that it was militia/sovereign-citizen related. I also knew the standoff had ended, and that the occupiers didn’t do a great job of cleaning up after themselves. See, e.g., “Oregon militia left firearms, bombs and a lot of poop,” CBS News (Feb. 17, 2016). (Okay, I just learned that last part.) I just didn’t have time to focus on it before it was all over. So I’m pleased to report that one of the occupiers who’s being prosecuted has just filed a predictably odd “counter criminal complaint” that we shall now consider.

Shawna Cox is one of 16 defendants being charged with conspiracy to impede federal officers through the use of force, intimidation, or threats. Although she has a lawyer, she took the opportunity to draft and file this pleading herself, calling it an “Affirmative Defense, Notice of Crimminal Counter Suite [sic]… With Claim for Damages by Declaration of Shawna Cox.” (Her lawyer did not sign the document and so far has declined to comment.)

Presumably her lawyer would have told her that, legally, this was a waste of time simply because (1) a private citizen can’t bring his or her own criminal charges and (2) a criminal defendant cannot file a counterclaim for civil damages. Cox can certainly file a civil case if she wants to, but that’s a separate thing, as the judge has pointed out. The docket says that while the court has directed the clerk to file the document for the record, “to the extent Defendant’s pro se assertions are in the nature of civil claims for damages or other civil remedies they are not cognizable in this criminal proceeding ….” To the extent they are defenses to the criminal charges, the court continued, Cox should work with her lawyer to plead and argue them at the proper time.

Assuming Cox’s lawyer can’t talk her out of making these claims and/or defenses, let’s see what they are.

Cox begins by identifying herself as a “victim, witness and informant to extremely serious public corruption and government oppression” and cites 18 U.S.C. sections 1512-14. Those sections make it a crime to tamper with or retaliate against such a person, and authorize a court to issue a restraining order prohibiting the conduct. She would have to prove this was done with the intent to affect some official proceeding, but let’s set that aside for now and consider the conduct she alleges.

The problem, she says, is the “arrogant, narcissi[stic] Federal Government officials who have organized together to highjack and steal our Constitutional form of government,” in this case by stealing lands from “the people of the states that were derived from the Northwest Territories….” As I have said repeatedly when discussing the “sovereign citizen movement” (and otherwise), there are plenty of good arguments that the federal government has gotten too big for its constitutional britches, and so it’s a little baffling why people insist on making up bad ones.

This “Northwest Territories” thing was new to me, at least. Cox argues that to prove the trespass charges against her, the government “will have to rationally explain before a jury of my peers why [it] refused to allow the states of the Northwest Territories to come in on the equal footing doctrine, of the original 13 states.” (It won’t, partly because she isn’t being charged with trespassing, but let’s go on.) There is an “equal-footing doctrine,” and the argument is apparently that if the federal government retained jurisdiction over land in a territory when the territory became a state, then the new state would not have been admitted on an “equal footing” and so the jurisdiction is invalid. But so far as I can tell, the doctrine is limited to the conditions under which a state is admitted; it’s not expressly stated in the Constitution anyway, and the same section from which it’s implied does say that “Congress shall have Power to dispose of” and regulate “the Territory or other Property belonging to the United States….” Because of that and the Supremacy Clause, courts have held that the equal-footing doctrine doesn’t make it unconstitutional for Congress to withdraw land from the states for public purposes like national parks or wildlife refuges.

Also, Oregon wasn’t part of the Northwest Territory, but I guess she means “those territories that were in the northwestern part of what is now the United States,” so, fine.

Cox is also a “victim, witness and informant,” she says, “to subversive activities and efforts organized by Law Colleges, State and Federal Bar Associations, to attack our constitutional form of government and subversively, secretly force socialism, communism and imperialism types of government onto the people of the United States of America.” (Please assume there is a “[sic]” after every such quote.) Speaking for myself, at least, I am not trying to do any of that. This is just a general claim that the legal system is all a big conspiracy against the People, or these People, anyway; while the legal system certainly has major problems, it is not that. Cox goes on to say that lawyers “have violated the separations of powers so they could create special privileges and immunities for themselves” and attack “our domestic tranquility,” and yes, some of those words are in the Constitution but that doesn’t mean a sentence using all those words will make any sense.

What else? The government conspired to attempt to murder her (which it didn’t); the occupiers were engaged in “hostile adverse possession … a legal way to challenge ‘clouded land titles’ and un-cloud them” (which it isn’t); citizens are entitled to call their own grand juries or “inquest juries” (which they aren’t); and “it is common practice for State Bar Members to redirect blame” (which … actually, she has a point there, we do that).

Finally, the relief Ms. Cox is seeking includes some interesting items. She asks the court to stop trying to “identify [her] as a subject of corporate United States of America,” and instead acknowledge that she is a sovereign citizen. She also objects to having any judge who is a member of a bar association preside over her case because such a person necessarily has a conflict of interest. And maybe most importantly, she claims to have suffered “damages from the works of the devil in excess of $666,666,666,666.66” (over six hundred and sixty-six billion, just to be clear).

This is far from the largest demand ever made, though I guess it makes her point. The real issue, though, is that (as you should all know by now) there are significant procedural issues with suing the devil, including service of process. Here she hasn’t even named him as a defendant, so she’ll have to get over that hurdle first.