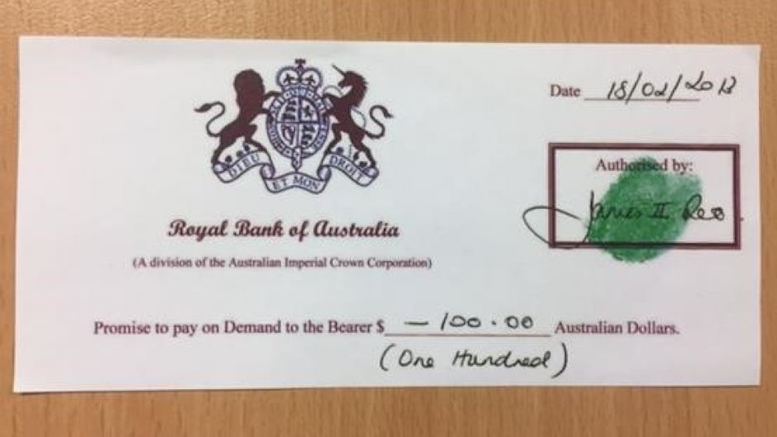 According to Australian sources, a 44-year-old man said Saturday that the reason he and others stole hundreds of items was to “test the lawfulness of the courts.”

He said this to police after being arrested, so it appears the test is now well under way. Not 100% clear what the test methodology is, but here’s what we know.

Phase One: steal stuff. The man and several “co-offenders” stole a total of 272 items from Woolworths and Big W stores in Canberra, in three separate incidents. In each case they filled shopping carts with stuff and then would “either present fake vouchers labelled as being from the ‘Royal Bank of Australia’ [see above] or would simply leave the store without paying.” It doesn’t seem to have mattered what the items were—

—as long as they were tasty.

Phase One seems to have been completely successful, maybe too successful, because they got away with the items each time. You can’t test the lawfulness of the courts if you don’t get arrested.

Phase Two: turn yourself in. The 44-year-old man approached police a few days later and presented them with what he called a “dossier” of information—on himself. The information included the fact that the stolen goods were, at that very moment, in his hotel room, and that he had stolen them for the purpose mentioned above. He insisted that the “Royal Bank” vouchers were legitimate currency, but he immediately undermined that position when police asked him how he was paying for his hotel room and he answered, “with real money.” Damn you crafty police interrogators!

Phase Three: get charged with a crime, preferably barefoot. This phase ended successfully on Saturday morning, when the man was arraigned, or whatever they call it there. According to the report, the man “appeared in court barefooted, as the police had seized the shoes and socks he was wearing as stolen items.” I take back what I said about the stolen stuff being tasty.

Good enough for me

Phase Four: be recognized as the lawful King of Australia. This part involves some speculation.

Until I remembered that she isn’t the one who signed the voucher, and her husband’s name is Philip and he’s not a king anyway. There was a James II of England, but he died in 1701. So who is this “James II Rex”? Does he even exist? Well, yes, according to this LinkedIn page: 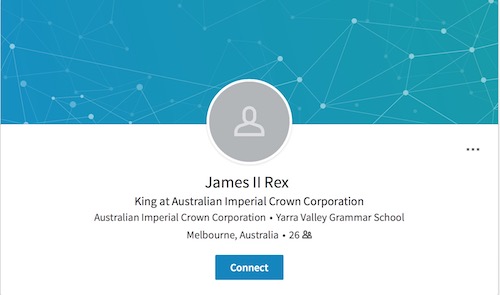 This looks like it should be our man—the name is right, he’s Australian, and he is king of, or at least king at, something called the Australian Imperial Crown Corporation, which is also mentioned on the vouchers. The lack of a picture is a little strange, though, and while the Yarra Valley Grammar School looks worthy of royalty, if the King of Australia was educated there, it seems odd they don’t mention it. As for his current resumé, the Australian Imperial Crown Corporation also has a website, and it purports to be a division of something called the “Crown of the United Kingdom of Great Britain and Ireland & The Commonwealth.” Well, there’s a United Kingdom of Great Britain and Northern Ireland, but maybe that’s just a typo. Who is the monarch of this thing? Queen Elizabeth II? Nope. James II Rex? Nope.

According to the Crown’s website, the current holder of that office is His Majesty by the Grace of God King Brent I: 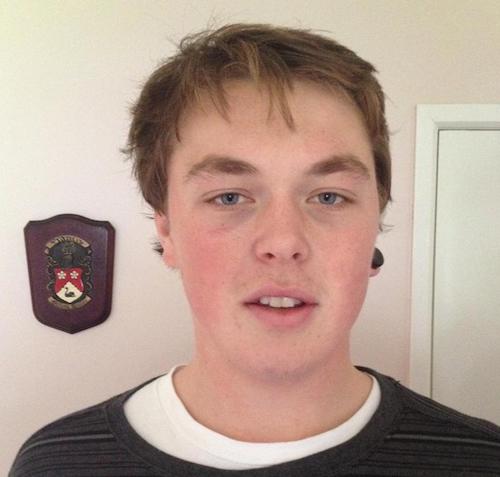 That’s clearly not the 44-year-old man arrested last week, who I assumed purports to be the James II Rex named on the voucher. It could be the 26-year-old who created the LinkedIn profile using that name, but if so why is he calling himself King Brent I? Are there three claimants to the throne?

This isn’t much of a clue, but King Brent inscribed this upon his Royal Website:

I know that it is my duty to keep you informed of MY WILL on anything that comes before Parliament, or that should come before Parliament. IT IS MY WILL the Syrian matter is put before the Parliament of the Commonwealth of Australia before any punitive action is taken.

I, His Majesty Brent I Rex, do swear that I will be faithful and bear true allegiance to Her Majesty Queen Elizabeth, Her heirs and successors according to law. So help me God!

/s/ By the Grace of God Brent The First, King of the United Kingdom of Great Britain and Ireland and His Other Realms and Territories, Joint Head of The Commonwealth

It looked at first like Brent was only claiming the Australian throne and swearing fealty to Queen Elizabeth II, but that only lasted a couple of paragraphs. So I wouldn’t put it past him to also try to usurp the throne of James II Rex.

Well, I’m not 100% sure what’s going on here, except that it looks like sovereign-citizen/freemen-on-the-land nonsense again. The reference to the government as a “corporation” is a common feature of those belief systems, the idea apparently being that any laws the “corporation” passes are actually just invitations to contract with it, and so if you didn’t agree to these contracts, you aren’t bound by them. And, of course, any citizen can set up his or her own corporate entity and do something similar. Hence the fake legal documents and “payment vouchers” that actually have no effect whatsoever. There probably isn’t any link between King Brent and the man arrested last week (James II Rex?), they just both happen to believe this one part of the sovereign-citizen voodoo.

Maybe we’ll know more after Phase Five of the test is complete, which I’d guess might be in about three to six months, with good behavior.

Inmate Sues Himself for Violating His Civil Rights