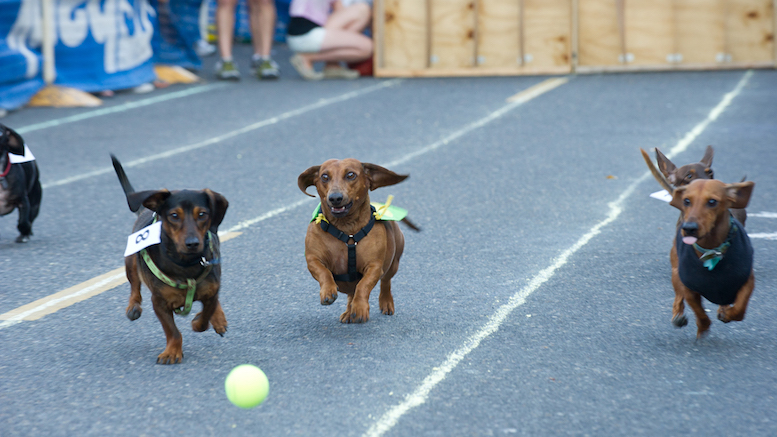 Yesterday in Boise, Idaho, the “Arena-Weina Extravaganza” went on as scheduled, but without the dachshund race that is usually the highlight of the event.

Dog racing is a felony in Idaho, you see.

The local country-music station that organizes the event, WOW 104.3, announced earlier this week that it had learned Idaho law does not allow dog racing under any circumstances, even if no bets are placed and the dogs are “wiener dogs” who run a distance of at most 40 feet. According to its announcement, local authorities were “dead serious” about arresting someone if the race went forward (although the station’s manager told me this was prompted by local media, not by aggressive law enforcement). So under the circumstances, they decided to cancel:

We here at WOW 104.3 had nothing but good intentions with Rick and Carly’s Arena-Wiena Cross. Good old family fun with some great people and their beautiful little wiener dogs. The run would’ve been thirty or forty feet and absolutely no wagering or any kind of abuse or mistreatment would be present.

With that said, we understand and respect our laws and more importantly, the safety of these animals. Every WOW 104.3 employee is a dog owner, lover, and advocate and their safety and treatment is top priority.

Well, now they understand the law, which does indeed criminalize any and all “live dog races” in Idaho (betting on televised races is still allowed), and has since January 1, 1996: 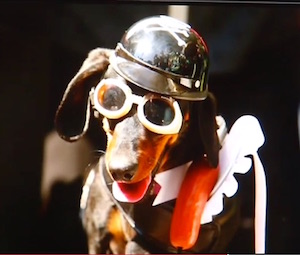 I guess that could be considered abuse (image: screencap from KBOI report)

Although there is no dispute that the intent was to ban greyhound racing, given the serious concerns about abuse of those dogs, as you can see the law does not contain an exception for very short dogs running very short races. It also bans dog races and betting on such races, not just races on which bets are placed. (I’m not sure there are any tracks still operating under the “grandfather” provision—betting on dog races has declined in popularity anyway.) So the law is clear, said a policy expert who helped draft the law and was interviewed by KBOI News. “It doesn’t say ‘greyhound racing,’ it says ‘dog racing,’ and it says that dog racing is a felony.” And it doesn’t matter if bets are placed, he pointed out. “It simply says dog racing is a felony.” So, there you have it. Absolutely no exceptions.

Except for the exception, he admitted later, and he wasn’t talking about the grandfather provision. The same guy who appeared to be saying the law definitely applied to 40-foot wiener-dog races also opined that it does not apply to winter dog-sled races of the kind that have been held in Idaho for at least a century. Viewers apparently called the station to ask about that, and the expert “told KBOI News that these races are considered legal because the dogs aren’t technically racing other individual dogs.”

Wait, what?! What part of “live dog racing shall be illegal” does this guy not understand?

The obvious thing for WOW 104.3 to do now is to immediately have another event in which groups of wiener dogs are harnessed together to pull tiny sleds. I mean, the guy who helped draft the law has admitted that makes it totally legal. To be safe, maybe they should build little walls between the lanes so the dogs don’t know they are racing other dogs, just in case the harnessing exception doesn’t hold up in court.

This opinion is free, but I expect to be invited to the Arena-Weina-Dog Sled-Race Extravaganza when it happens, which should be as soon as possible.