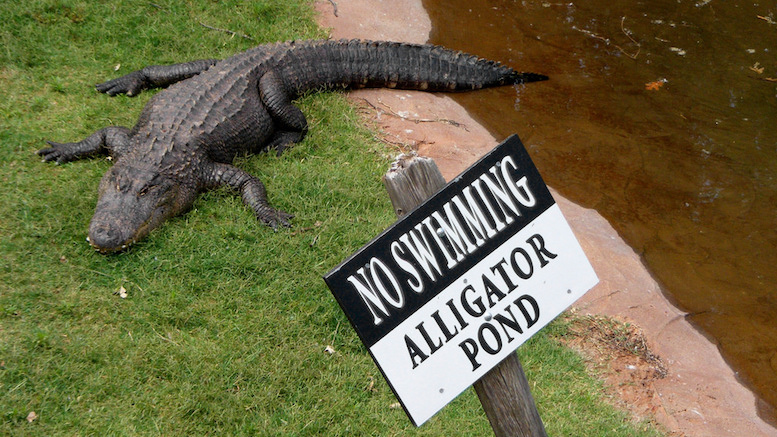 I don’t have a separate category for this, at least not yet. But “lake” would be high on the list, that’s for sure. One problem is that you, the criminal, are almost certainly going to be less mobile in the water than the authorities will be. If they don’t have a speedboat or helicopter with them, they can get one, while you, the criminal, will be stuck with whatever you’ve got. So if attempted hiding turns into attempted fleeing, as it so often does, you’ll be at a major disadvantage. See, e.g., “Sinking Pedal Boat Ends Ridiculous Escape Attempt” (Jan. 28, 2010).

A similar problem awaits one who has chosen to hide in a pond (like a lake, but smaller, and also funnier for some reason). Again, the water renders you less mobile than law enforcement. But while a lake at least offers the possibility of escape, assuming you could make it to the other side, a pond is not a sufficient obstacle to law enforcement. They can not only see you at all times, which is not so good for the hiding, they can also just stroll around to the other side to stop any fleeing. No, the best you can do with a pond is a temporary standoff, if that’s even the right word. See, e.g., “Police Wait Patiently for Man in Pond to Surrender” (July 24, 2014); see also “Further Facebook Follies” (July 2, 2014) (one of which may have involved pond-hiding).

Oh, another one for the list would be Bush In Which Wasps Have Previously Hidden, so a separate category is getting more likely all the time.

Today’s proposed entry, “Island in Alligator-Infested Lake,” combines the worst of all the above: not only are you surrounded by water, something even more unpleasant than you hid there first.

This happened in Montgomery County, Texas, on March 28. Officers responding to reports of erratic driving ended up chasing a car with three people in it, two of whom were detained after the pursuit ended. The driver, however, “ran off into a wooded area with large lakes,” and apparently decided to go with lake-hiding instead of trying the woods. That, of course, was a mistake. 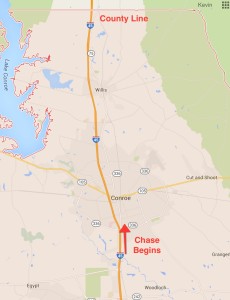 I just spent a few otherwise billable minutes trying to determine whether this was in fact a lake event or only involved a pond, which, as noted, I think is funnier for whatever reason. But the article provides few details.

We know the vehicle was first reported in Harris County (Houston) and moved north into Montgomery County. We know the chase proper began on I-45 near River Plantation Drive, presumably moving north from there, but ending within Montgomery County. There are lots of lakes in the area, but of course the distinction between “small lake” and “large pond” is not very clear. Either could have islands, and a closer view reveals that many of those in the area do. Unfortunately, I think we just don’t have enough information to know in this case.

We do know—although the suspect apparently did not—that this body of water had alligators in it. 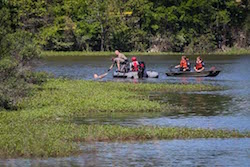 Could be a pond. Does have gators. (Image: Michael Minasi, The Courier)

It was “alligator-filled,” in fact, according to the article, although that is probably an exaggeration. It likely seemed filled with them to the suspect, even if there was only one. And officers found the suspect “seeking shelter from alligators on an island in the middle of the lake [or pond].” Under the circumstances, he was pretty happy to see them.

The very same day, another chase in the area ended in a “strange, mud-coated standoff” after that driver got out of his car and jumped into the Brazos River (which I am told is also full of gators). He too, went nowhere. I don’t think this justifies adding “River” to the list, though, because depending on the river, this plan has a chance of actually working. But in that case, the suspect seems to have jumped into a mud-choked, slow-moving bend of the river, which gives it a lot of pond-like qualities, now that I think about it. So, yeah, I’m putting that in the pond category.