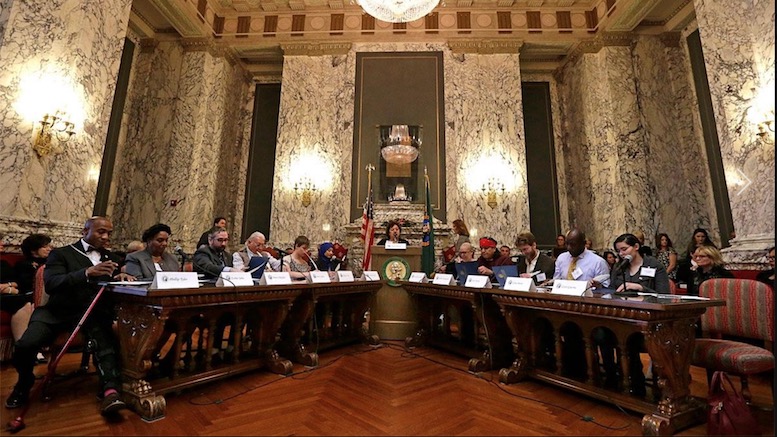 The EC meeting in Washington. Note dude in tux, another in headband

As you’ve probably heard, Donald Trump was elected yesterday to be the next president of the United States. Each state’s electors met and voted, and for reasons that presumably make sense to them, 304 of the 538 electors voted for Trump, giving him the majority he needed.

In an indication of just how trivial the Electoral College has become, it’s kind of difficult to find, all in one place, a comprehensive breakdown of how the electors voted. Officially, there were seven “faithless electors,” as follows:

(Faith Spotted Eagle, by the way, is a Native American activist who opposes the Keystone pipeline. The others you probably recognize.) But that actually understates the level of dissent from the Electoral College yesterday because it doesn’t count electors who resigned or were replaced before voting or whose votes were invalidated after the fact under state law.

One elector in Maine was ruled “out of order” after voting for Sanders, and he changed to Clinton on the second ballot. In Colorado, one tried to vote for Kasich and was replaced. In Minnesota, one tried to vote for Sanders and was replaced. In addition to the two Texas defectors shown above, one resigned before the vote rather than vote for Trump. (Three other Texans apparently had to be replaced because they learned at the last minute they were “ineligible” to be electors, but that report didn’t say why.) So it seems more accurate to say there were 11 actual or attempted faithless electors, but “officially” there were seven.

There were also some defections (apparently also seven) in the vice-presidential vote. All the Washington defectors voted for someone different, meaning that Elizabeth Warren, Maria Cantwell, Susan Collins, and Winona LaDuke each got one VP vote. Warren also got one VP vote in Hawaii, and one Texas elector reportedly voted for Carly Fiorina instead of Mike Pence. Also, the guy in Minnesota voted for Tulsi Gabbard for VP, but that was invalidated.

These aren’t the highest numbers of defections ever, but they’re up there. In fact, the number of presidential defections is the highest ever for an election in which the candidate who ran for president wasn’t dead when the electors voted. (In 1872, Horace Greeley died after losing the general election, and 63 of his electors jumped ship.) There’ve been two or three elections in which more electors picked a different vice-president, and in one of those the candidate had also died. So far, no defection has changed the outcome of an election, though, and this year was no exception.

Ultimately, the vast majority of electors seem to have concluded that they should follow the results of the popular vote in their respective states. That’s fine, and it seems like a good idea, actually; but as I wrote yesterday, to me it seems plain as day that they don’t have to do that if they don’t want to, and that state laws interfering with or limiting their choices—much less punishing them for voting the “wrong” way—are unconstitutional. The Colorado judge I mentioned yesterday didn’t agree with this, or at least wouldn’t grant a TRO, and I saw that the TRO ruling was affirmed by the Tenth Circuit. That court didn’t rule out the constitutional challenge, though. Other lawsuits are also still pending, which might make a difference in future elections.

The Supreme Court has never ruled on this specific issue, though it has held a state can require its electors to sign a pledge in a primary election saying they’ll support the party’s nominee. (Weirdly, in doing that it reversed a decision by the state’s own supreme court that the requirement was unconstitutional.) This isn’t quite the same thing as saying a state could actually punish an elector who broke such a pledge (other than maybe precluding him or her from serving again) but it’s pretty close. And again, to me it seems totally wrong. As Justice Jackson wrote in dissent in that case:

No one faithful to our history can deny that the plan originally contemplated, what is implicit in its text, that electors would be free agents, to exercise an independent and nonpartisan judgment…. This arrangement miscarried. Electors, although often personally eminent, independent, and respectable, officially became voluntary party lackeys and intellectual nonentities…. If custom were sufficient authority for amendment of the Constitution by Court decree, the decision in this matter would be warranted…. But I do not think powers or discretions granted to federal officials by the Federal Constitution can be forfeited by the Court for disuse.

Right. We expect electors will generally follow the popular vote, and it’s been that way for a long time now, but that just isn’t what the Constitution says or what it was meant to create. Seems like we should fix this situation, one way or another. It may not be our first constitutional priority over the next few years, of course, but still.

Police Chief and Police Dog May Have Same Degree