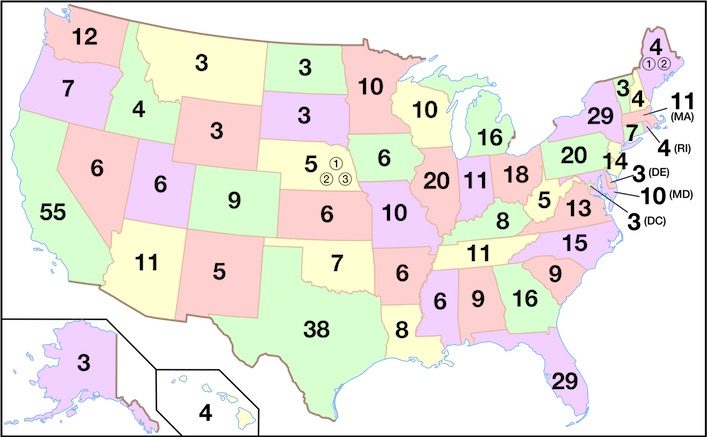 Almost certainly, Donald Trump will be elected president later today. (Sentences like that one will probably never cease to amaze me, but regardless, that one is probably true.) Some would argue, of course, that he was elected in November, but those people are wrong. If he’s elected, it will be today, December 19, because this is the day the 538 members of the Electoral College get together and cast their votes. Under the U.S. Constitution, weird as it may seem, that’s how a president gets elected.

To me it couldn’t be plainer that the electors could vote for whoever they want when they meet today, regardless of how things went on Election Day. They probably won’t, and maybe they shouldn’t, but I think that’s what the Constitution says.

Back when they were writing the Constitution, the Founders debated whether the President should be chosen by Congress, by the state legislatures, or even (gasp!) directly by the people. But they didn’t adopt any of those plans. Instead they provided that the President would be chosen by a group of “Electors.” (Although they sometimes used the word “elector” to mean just “voter,” it means something more specific here.) They also debated how the Electors should be appointed, and ended up deciding that the state legislatures should do it, leaving the “manner” up to them (Art. II, § 1):

Each State shall appoint, in such Manner as the Legislature thereof may direct, a Number of Electors, equal to the whole Number of Senators and Representatives to which the State may be entitled in the Congress: but no Senator or Representative, or Person holding an Office of Trust or Profit under the United States, shall be appointed an Elector.

As you can see, they decided they didn’t want Congress involved at all in the process (at least at first), so this creates kind of a “virtual” Congress solely for the purpose of choosing the President: each state gets the same representation as it does in Congress, but different people cast the votes for President. That’s the “Electoral College.”

So each state appoints electors “in such Manner as the Legislature thereof may direct.” Then what do the electors do? Well … they elect the President. Exactly how they do this is explained now in the 12th Amendment (which tinkered with Article II, section one, after a tie vote in 1800 made it clear the original plan sucked). Here’s what happens:

Confusing? Yep! It’d be a lot simpler, of course, if electors were just supposed to rubber-stamp the popular vote in each of their states. In fact, you wouldn’t need to have electors at all—just count up the votes per state according to who won the popular vote there, and add them up to see if somebody got to 270. That’s what we do on Election Day, basically.

It just isn’t what the Constitution says we’re supposed to do.

People who believe electors should be able to vote for anybody usually cite Alexander Hamilton, who said exactly that in Federalist 68. But they shouldn’t have to cite him, because the Constitution itself makes it clear enough, as far as I’m concerned. It just doesn’t provide for direct election of the President because the Founders didn’t think that was a good idea. They decided to have state legislatures appoint certain people as “electors,” and those people would pick the president. That isn’t especially democratic and it may even be stupid. But that’s what the Constitution says. And the whole setup necessarily means that electors must be able to vote for whoever they want or else there’s no reason to have it at all.

Have no fear, those who think otherwise or who just want to make sure Trump becomes president, because although the law is unsettled the practice of course is that electors vote the way the people of their states did, and that’s what will happen in almost every case today. (That practice developed almost immediately, in fact.) Most states have a law requiring electors to vote that way. The argument is that if state legislatures get to pick the electors then they must also be able to pass laws telling them how to vote. But what the Constitution actually says is only that each state legislature may direct the “manner” in which electors are “appointed.” Doesn’t say it can tell them how to vote. And again, if electors couldn’t vote independently, the whole arrangement would be unnecessary.

This is not a winning argument, judging by the outcome of a lawsuit in Colorado in which two electors wanted Colorado’s elector-binding law declared unconstitutional. That case is still pending, but the judge rejected their request for an injunction so it doesn’t really matter. (Here’s the plaintiffs’ motion, and here’s the response, if you’re interested.) He said the lawsuit seemed to him like a “political stunt,” and in a sense that’s probably true. But at a minimum it’s highly weird that the process we follow to pick the President, of all people, just isn’t the one written down in the Constitution. Seems like we should either do what it says, or change it.