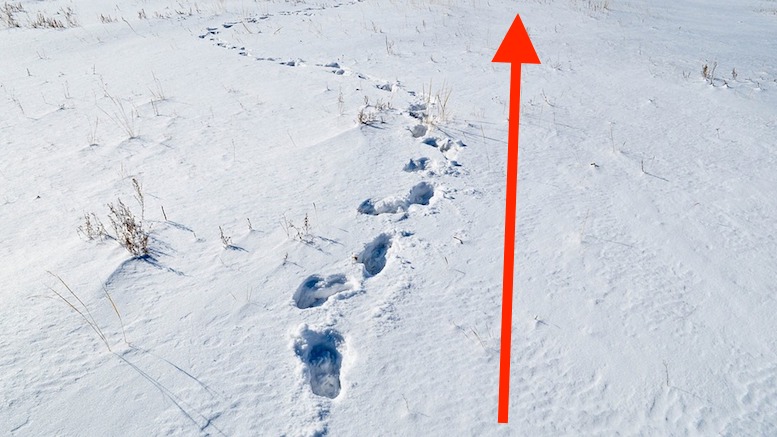 The game is afoot 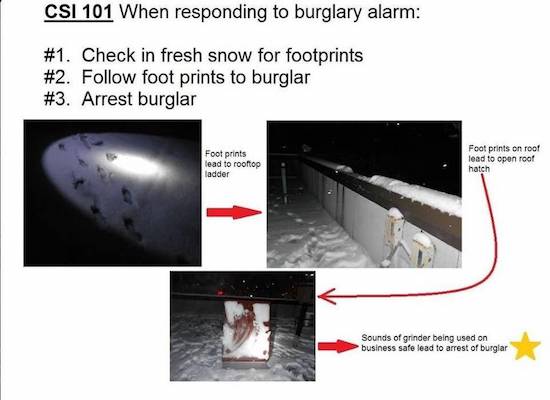 Loud noises generated by burglar were unnecessary but helpful

Someone at the Olympia (Wash.) Police Department put this together to illustrate how officers caught a man burglarizing a local Taco Bell at 3:30 a.m. on February 6. It had snowed for most of the previous 12 hours and was just letting up about the time of the 911 call. This meant there was a nice, fresh covering of snow perfectly suited for leaving a trail of footprints.

This trail led toward the building where an alarm had been triggered. Specifically, it led to a ladder, the ladder went to the roof, and then more prints led to an open roof hatch. Inside: Burglar. “Snow makes crime scene investigation much easier,” one officer said, and that’s probably not always true but it certainly was here.

This, of course, is hardly the first time criminals have made things easy for law enforcement by leaving a trail of some sort that led police to them, directly or indirectly. See “Crooks Leave Trail to Own Front Door” (Apr. 5, 2005) (coins dropped out of a hole in a milk crate); “Cake-Wielding Police-Station Vandals Test Positive for Icing” (Jan. 12, 2007) (trail of crumbs led from station to cake box outside restaurant; two restaurant patrons later arrested); see also “Angry Parrot Leads Police to Thief” (July 21, 2006) (parrot-stealer’s DNA obtained from blood trail caused by parrot bite); “Trail of Chewing-Tobacco Spit Leads to Thieves” (May 14, 2009) (safecrackers’ DNA obtained from chewing-tobacco spit trail); cf. “Police Rapidly Crack the Case of the Stolen GPS Devices” (Jan. 20, 2007) (self-explanatory).

Judge Reprimanded for Jailing Guy Who Gave Him the Raspberry

Court: No Cause of Action for Gun-Safety Instructor Who Shot Himself