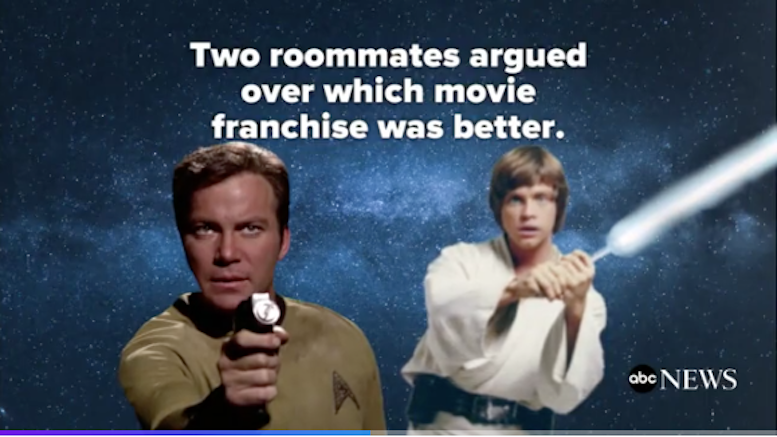 This is basically just an update to GRTK #68: Star Trek v. Star Wars, but after doing 1600 words on the frozen-guru decision I’m trying to write shorter posts. Hence, this.

Ars Technica reports it was able to reach one of the GRTK #68 combatants directly, and thus resolved the until-then-burning issue of who was the primary aggressor: it was the Trek fan.

On the other hand, that conclusion is based solely on an interview with the Wars fan. And you know how they are.

Much remains unclear even with this new information. Ars also provides the police report, in which the responding officer wrote that the two gentlemen had been arguing about “WHETHER STARWARS [sic] OR STARTREK [sic] WAS A BETTER MOVIE.” That doesn’t tell us much, though, because there could be wildly different answers to that question depending on which movie(s) from each series they were talking about. Ars suggests they were “talking about the two science fiction series,” emphasis added, which would surely mean the respective series of movies. But according to the victim, the argument ranged much more widely than that anyway, and may have focused on a much more specific question:

Well, that blurs the lines even more. I personally think Trek is superior—to be honest, I have trouble getting past the name “Count Dooku”—but I don’t think I’d ever argue that either Spock or Yoda were not the shit. I probably would never have thought to put them in the same category, actually, so I don’t see a reason each could not be the shit within his respective fictional universe. The battle lines just don’t seem clearly drawn here, at least to me.

In any event, while the Trek/Wars and subsidiary Spock/Yoda debates clearly contributed to the assault, according to Ars the specific trigger may actually have involved Batman:

Before the altercation broke out, the two men had been playing a Batman game on Xbox. Burk had asked Whyte how he did a particular trick on the game. [He said the cops misinterpreted the “trick” comment, so evidently that isn’t an insult.]

As they played, they were ribbing each other, dishing out insults like “joker,” and other names.

Eventually, some other friends of Whyte’s came over. The entire group got to talking about the two science fiction series. Burk, who preferred Star Wars, was arguing his side.

Burk then reprised the “joker” moniker, to which Whyte took offense, and felt that he had been disrespected in front of his friends.

So, obviously, there was a lot going on here, but I decided “disrespected by Yoda fan” was a fair summary.