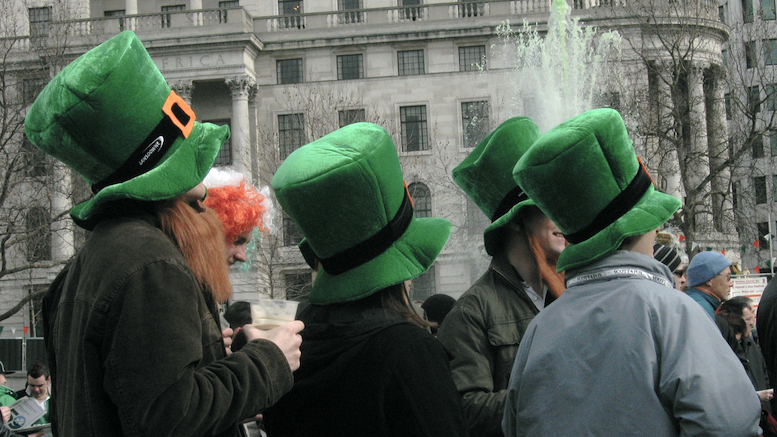 Others being forced to wear leprechaun hats (image: http://www.cgpgrey.com, CC 2.0)

Certainly the definition of “basic human rights” has evolved and generally expanded over time, but whether it includes the right not to be dressed up as a leprechaun I think remains unclear. This case may provide guidance, one way or another, but it probably won’t.

The claim was made in August by Kris Thompson, formerly chief of staff for New York state Senator Daphne Jordan. According to the Albany Times-Union, which obtained a copy of the complaint but has for some reason not posted it, Jordan fired Thompson in July after he refused to attend a strategy meeting at a diner in Halfmoon, New York. Thompson had previously served (as chief of staff, not while working at the diner) former state Senate Majority Leader Joseph Bruno, who resigned in 2008 while under investigation by the FBI. Bruno was convicted of fraud, but successfully appealed and was acquitted in a second trial. But according to Thompson, some continue to believe Bruno was corrupt, and they express that opinion to Thompson every time he goes to the Halfmoon Diner. He, therefore, has pledged to “never step foot in there again.”

Now, here is one of those paragraphs you should feel free to skip, because it does not advance the story at all but rather rants about something unrelated that bothers me. In this case, that is the use of “step foot in” rather than “set foot in.” While I suppose you have the legal right to use “step foot in” if you like, and I have heard people who I otherwise greatly respect do just that, the fact remains that it is an appalling breach of the norms of civilization to do so.

The technical reason is that as a verb, step is almost always “intransitive,” meaning it doesn’t take a direct object. The subject of the sentence is the thing doing the stepping. Set is primarily transitive: the subject is setting something else (the direct object). Applied to a foot, therefore, set is plainly the better choice, at least assuming the foot is connected to a person who is moving it and not a disembodied and enchanted foot able to move itself. Should you be describing the actions of a disembodied and enchanted foot that can move itself, then by all means, use step, as in “the disembodied and enchanted foot stepped into Halfmoon Diner.” But in all other cases, you should use set, as in “I pledged to never set foot in Halfmoon Diner again.”

Can you find examples of people using “step foot”? Sure. The OED even has a handful of examples, though far down the list of meanings and most recently dated 1880. But “set foot” is clearly favored, with examples dating back to the 13th century (“Of schup hi gunne funde & setten fout to grunde”) and as recent as 2014 (“You won’t set foot in that skatepark again”), and others by authors like Chaucer, Shakespeare, and Spenser. You can agree with those guys, or follow the leprechaun. Up to you.

Getting back to the leprechaun, or alleged leprechaun, he refused to go to the fundraiser in July because of his aforementioned pledge. “Maybe you need to get over it,” his boss responded, and while one hates to hear that, it is something that one might want to heed if said by one’s boss. Thompson did not. “Let me be perfectly clear,” he texted back. “I’m not stepping foot [sic] in there. Ever. And keep pushing and I will resign…. Let me know how that works for you.” It did not work well for her, judging by the fact that within 24 hours, he was stepping out into the parking garage accompanied by the sergeant-at-arms and presumably carrying a box of personal items.

The leprechaun incident had happened several months earlier, however, suggesting Thompson was still unhappy about it at the time the diner controversy arose. This had to do with a St. Patrick’s Day parade in which the senator and her staff were planning to participate. She, Thompson, and another staff member reportedly exchanged text messages “that included online images of leprechaun clothing” intended for Thompson. “Wig and hat for Kris when he is pulling the candy wagon,” Jordan texted. “[And a] Suit to go with it.” The staff member responded, “I’m sure that’s what he was planning to wear,” adding an emoji of a four-leaf clover. They seem to have been joking, and the report doesn’t say how Thompson responded at the time, if he did. According to his complaint, however, he was not simply miffed, he interpreted this as a threat to his “basic human rights”:

I felt that my direct supervisor [Jordan] violated my basic human rights by directing me to wear clothes not befitting a 61-year-old grown man. Dressing me up as a leprechaun is wrong. A supervisor, let alone a sitting state senator, should exercise better judgment than to send such images to a subordinate. I refused to wear the clothes to the parade.