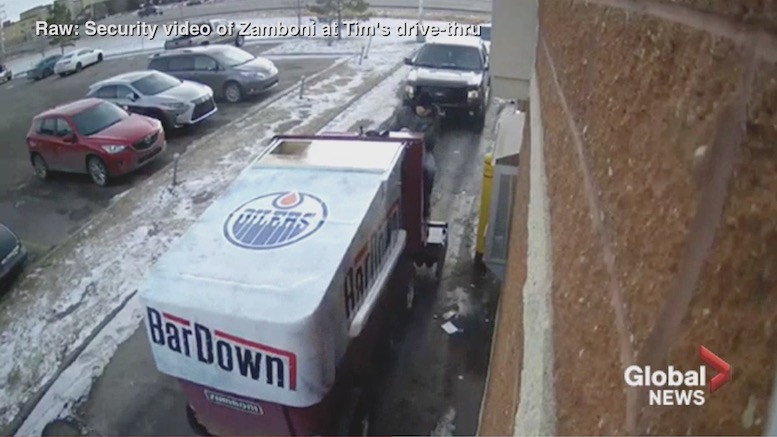 A Canadian does a very Canadian thing

I considered taking the day off since it’s Christmas (Eve), but that would’ve meant the top story on Christmas Day would have been about a horned pagan priest, a coincidence that might conceivably have been taken the wrong way. Of course, most of you have probably heard that the December 25 date was swiped from pagans to begin with, so maybe not.

Although I was surprised to find, and so feel compelled to pass on to you, that there is what seems like pretty good evidence the swiped-from-pagans story may not be true. According to this article by Andrew McGowan, for example, what mattered more to early Christians was the date of Jesus’ conception, not his actual birth (which makes sense, now that I think about it, because the former event was way more miraculous). At least some of them believed Jesus was conceived and crucified on the same day of the year, and the Gospels suggest that the Crucifixion was on the equivalent of March 25. If Jesus was conceived on March 25, then nine months later is—ta-da!—December 25.

Not that anyone actually said ta-da! when Jesus was born, although we can’t prove they didn’t.

Now, what does any of that have to do with a Canadian taking his Zamboni through a drive-thru? Well, let me think about that. I’ll try to get back to you by the end of the post.

The Zamboni ice-grooming machine has appeared here before, of course. Generally the issue is whether it qualifies as a “motor vehicle” for purposes of laws against driving said vehicles while intoxicated, but that isn’t the issue here. In this latest Zamboni incident—which we can date precisely, to December 22—a Canadian man took a Zamboni through a Tim Hortons drive-through in Alberta to pick up a hot chocolate. He recently bought the machine to use on the ice rink he built in his backyard for his kids to use, and had to get it from town to his home a few kilometers away. “I told the boys at the shop I was taking off and going to run the Zamboni to the house,” Jesse Myshak said, “and they all kind of made jokes that I should stop by Tim Hortons and grab a coffee … and take it through the drive-thru. I figured, ‘Might as well grab something warm on the way,'” and so he did.

This amused everyone greatly. Saying his appearance on a Zamboni at Tim Hortons was “the most Canadian thing” she’d ever seen, the woman in front of him paid for his order. Of course, it was even more Canadian than she knew, since it was actually Myshak’s own personal Zamboni, which he was taking home to use on the ice rink in his backyard, a rink that the article says is half the size of an official NHL rink. And the story gets even more Canadian from there, if that’s possible, because Myshak politely waited his turn in line, he didn’t get arrested or ticketed, and everybody all just smiled and took pictures and nobody got shot or punched or groped or bombed or did anything racist or violated anybody’s rights and it basically just made everyone’s day better.

Myshak didn’t get arrested for anything, but was asked whether he “feared any legal repercussions.” He acknowledged there was some concern he might get a ticket, and so someone followed him in a pickup with its hazard lights flashing. That was enough for the one policeman who passed them on the highway, he said, and the officer must have noticed their procession because Zambonis just don’t go very fast. This does raise the question whether driving a Zamboni outside an ice rink is legal while not under the influence, and I can confidently say the answer to that is maybe.

Under section 117 of the Traffic Safety Act—and this analysis is especially quick, ladies and gentlemen, because I still have to finish my Christmas shopping—a Zamboni I think would be considered an “off-highway vehicle,” which with some exceptions is subject to the same rules as regular motor vehicles. But as the term suggests, an off-highway vehicle generally can’t be driven on a highway, except to go “across” it after taking necessary precautions. So that part of the trip, at least, may technically have been illegal. (There very well could be a specific exception for Zambonis up there, but I hope you’ll cut me a little more slack than usual this time.) It might also technically have had to be registered and insured. But I don’t see any more general restrictions, so I don’t see why the drive-thru trip itself would be illegal. He wasn’t causing any trouble, so let the guy get his Zamboni home, for Christ’s sake.

Ooh, there’s a segue back to Christmas. I’ll admit, I haven’t thought of anything great. It does strike me that this post is fairly typical of many that you might see here. It was sparked by a link that a reader sent me—yes, in this case, a Canadian. I get a lot of links, and feedback, both of which I appreciate. The post contains a largely irrelevant digression into some facts I happened across that I thought were interesting. It focuses on an unusual event that has, or for which I can gin up, at least some connection to the law. And there are some jokes. Oh, and there is a reference to an earlier and related post, and because I’ve been doing this so long now it may not be surprising that I have not just earlier Zamboni posts, but a post about guys who took two Zambonis through a drive-thru. (They got fired, and possibly charged with something, but that was in Idaho, not Canada.)

So, if you enjoy that sort of thing, please consider this my Christmas gift to you. If not, well, you can’t return it, but you can delete the bookmark. And that, too, is a sort of gift.

Merry Christmas/Happy Holidays, or whatever term you prefer.