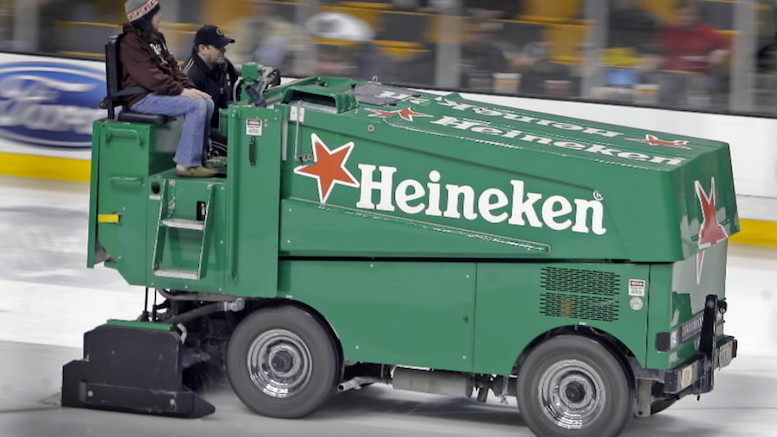 On Saturday, a Zamboni driver in Ste. Anne, Manitoba, was arrested after thoroughly botching things during the second intermission of a youth-league game.  “On his first lap he struck the gate where the Zamboni drives onto the ice,” a coach said, “and also broke pieces off the actual Zamboni. One piece got stuck under the Zamboni, which left a ridge on the ice with every lap.” When officials pointed out the difficulty of skating over ice ridges, the driver angrily insisted it was “good enough” and told them to go ahead with the game. Instead, they called supervisors and also the Royal Canadian Mounted Police, who took the driver into custody.

It doesn’t seem to be clear whether the driver was actually intoxicated. The coach quoted above said he “spoke to him up close and couldn’t smell any alcohol on him, couldn’t see that his eyes were bloodshot or anything. [But] I’m not an expert,” he added. He said he initially suspected the driver might have had some sort of health issue. But the Mounties said he refused a breathalyzer test, and they have charged him with impaired driving (and refusing a breathalyzer test, also illegal there).

If my research is correct (not licensed in Canada and/or Manitoba!), here’s how the vehicular analysis works up there. Section 253 of the Criminal Code provides that:

Every one commits an offence who operates a motor vehicle or vessel …, whether it is in motion or not,

(a) while the person’s ability to operate the vehicle … is impaired by alcohol or a drug; or

(b) having consumed alcohol in such a quantity that the concentration in the person’s blood exceeds eighty milligrams of alcohol in one hundred millilitres of blood.

“motor vehicle” means a vehicle that is drawn, propelled or driven by any means other than muscular power, but does not include railway equipment….

So the only way to legally operate a Zamboni in Canada while under the influence would be to push it (unless there are horse-drawn Zambonis), but that’s not what happened here.

Note that it doesn’t matter under these laws whether the operator was operating the thing on a road. You might still argue that “motor vehicle” wasn’t intended to apply to vehicles that top out at maybe five mph (eight or nine Canadian) and were only being operated on an ice rink during intermission. That argument has worked before, in fact, but I wouldn’t call it “high-odds.”

For those keeping track, this is the fourth Zamboni DUI on which I have reported. But I also just located a fifth Zamboni incident, one that I somehow missed back in November 2008. And that too involved a Canadian, an Ontario woman who repeatedly crashed into the boards and turned out to have a flask of vodka in her pocket.

So here’s the current rundown:

Thus the tally of known DZWI arrests now stands at five. They have involved four men and one woman, one known acquittal, and one case of being mocked by children; more importantly given my headline, they have involved three U.S. citizens and two Canadians. So the U.S. is clinging to a 3-2 lead in absolute terms, but Canada is now way ahead per capita. As of July 1, the estimated population of the U.S. was 321,195,023; Canada’s was 35,851,800. So while the arrest rate in the U.S. is about one in 107 million, one in every 17,925,900 Canadians has been arrested for impaired Zamboni driving. (And those are just the arrests I know about.)

I’d guess that maybe six out of ten Russians have had similar problems, but it’s hard to get reliable statistics from over there.

This Defense Attorney Got “Street Knowledge,” Yo