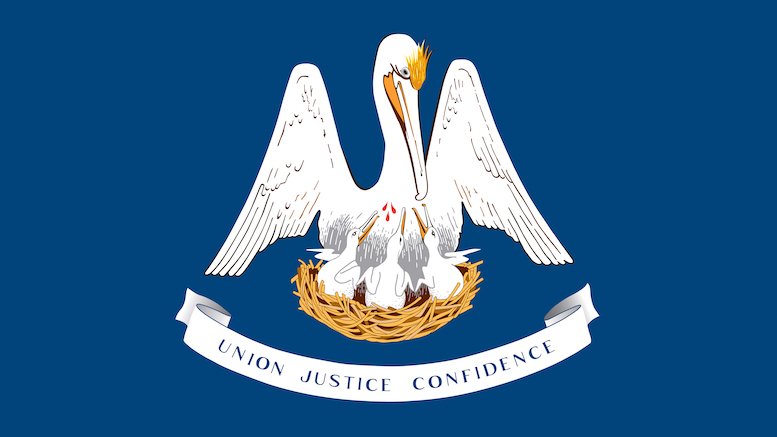 Louisiana's state flag, which depicts a pelican wounding itself

Here’s a followup about a case I mentioned when it was filed three years ago. See “Best Friends Allege They Were Fired After Swapping Wives” (Jan. 6, 2015). I’m mentioning it again even though my prediction, “I think the plaintiffs probably win this one,” has turned out to be wrong. I am occasionally wrong, of course, but this one’s embarrassing mainly because I seem to have overestimated Louisiana. I really should have known better.

The facts are simple, though unusual. The plaintiffs were two sheriff’s deputies in Bossier Parish, up in the northwest part of the state near Shreveport and the Texas border. (Towns in that general area of the state purportedly include Plain Dealing, Belcher, Trees, Woodchuck, Latex, Oil City—across the lake from Uncertain, Texas—and, to my great and continuing astonishment, a town named Koran, Louisiana, home of the Koran Baptist Church.)

At least when this image was taken, the area was apparently not on fire

Each deputy was a man married to a woman. Each deputy fell in love with the other’s wife, and the wife of each deputy fell in love, conversely, with the other deputy. (For whatever reason, this is easier to understand than it is to explain in words, I think.) The men were best friends, and apparently the women got along well enough, and the upshot was that everybody just switched. In October 2014, in fact, each deputy moved into the other guy’s (former) house and lived there with his best friend’s wife. (They all planned to take care of the legalities, and in fact they later did just that.) So, everybody’s happy.

No, not everybody. As the district court put it, “[o]n or about October 31, 2014, the facts and unusual relationships giving rise to the instant lawsuit were brought to the attention” of said sheriff, an investigation was conducted, and the results thereof reported. Coker v. Whittington, 169 F. Supp. 3d 677, 679 (2016). Whereupon, said sheriff decreed that the men would be placed on unpaid leave until such time as they “cease[d] cohabiting with a married woman not their own wife.” They declined to do so, and were fired. They sued not long afterward.

The sheriff argued that their activities violated the office’s code of conduct, which requires deputies to act “at all times in such a manner as to reflect the high standards” of the office, and to refrain from “any illegal, immoral, or indecent conduct” or “any legitimate act which, when performed in view of the public, would reflect unfavorable [sic] on the Bossier Sheriff’s Office.” As I mentioned in my first post, I was surprised that “fornication” is not illegal in Louisiana, although not as surprised as I was to learn that there is a still-unburnt town there named “Koran.” Not remotely. So the sheriff was necessarily arguing that their conduct was “immoral,” “indecent,” or would reflect unfavorable. None of which are especially well-defined concepts.

Plaintiffs argued this violated their First and Fourteenth Amendment rights to freedom of association and due process respectively, as well as their right to privacy. While you don’t lose your constitutional rights when you take a job, of course, they may be limited in some ways. The applicable standard depends on whether what’s at stake is viewed as a fundamental right, in which case a court will apply “strict scrutiny” and the restriction will probably be struck down, or not, in which case the “rational basis” test applies and the plaintiff will probably lose. That is, all the defendant has to do is come up with some “rational” explanation for the rule, and the court will defer to it.

Of course, what is “rational” depends on who you ask. The district court cited a case holding that a police department can tell officers how to wear their hair, in the same way it can compel other appearance requirements like wearing a uniform. It cited another case involving an officer’s extramarital affair, in which the court held that there was a “rational basis” for a rule that required officers’ private lives to be “unsullied as an example to all,” because it “advanced the legitimate law enforcement goal of securing the community’s confidence in the integrity of its police officers.” (It’s the “rational basis” test, you see, not the laugh test.) And so, for similar reasons, the district court held in Coker that the no-cohabitation rule could be sufficiently rationalized. The court acknowledged “changes in the landscape” due to recent privacy cases, it just did not seem to care much when weighing those changes against the sheriff’s right to tell his deputies who they could live with.

They appealed, and in May 2017, a Fifth Circuit panel made clear that it, too, thought little of those who would poop openly upon the matrimonial splendiferousness of the wedding bond in suchlike manner: 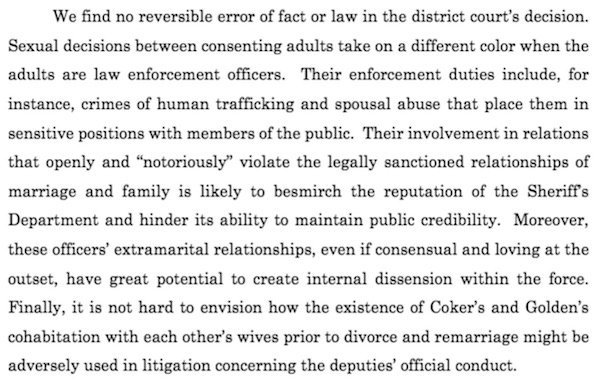 That’s all the analysis there is, really, except for a footnote listing cases the court said have uniformly approved of firing police officers for “sexually inappropriate conduct.” But those cases seem to involve much more disruptive conduct, like the Michigan case where an officer was fired for getting involved with his superior officer’s wife. Okay, bad idea. But here, everybody was getting along fine—it was the sheriff who disrupted things. None of what the court says above convinces me this even meets the rational-basis test, weak as that test is.

Otherwise, the court only cites the privacy cases (Lawrence v. Texas and Obergefell) so it can say it’s not going to apply them. “Obergefell does not create ‘rights’ based on relationships that mock marriage,” the court concluded, so that’s how it felt about that.

The U.S. Supreme Court recently denied the deputies’ petition for certiorari, so it won’t be reviewing this particular case. In the Fifth Circuit, at least, officers cohabitate at their peril for now.

Headline of the Day: “Man Says Weed in Buttocks Is His, Cocaine’s Not”