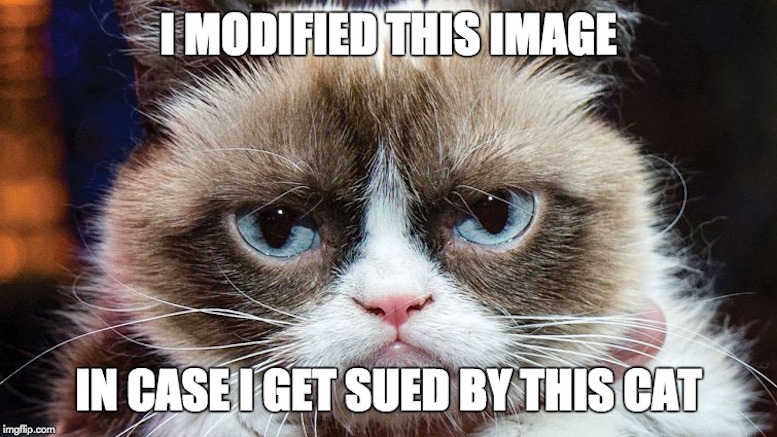 Because he might frown on my "fair use" defense

But both statements are almost certainly true.

“Grumpy Cat” is the brand associated with Tardar Sauce, a grumpy-looking cat with whom you are almost certainly familiar. In fact, according to the complaint filed against Grenade Beverage LLC by Grumpy Cat Limited:

Grumpy Cat (a/k/a Tardar Sauce) is one of the most famous and recognizable felines in the world due to her perpetually grumpy expression. After a picture of Grumpy Cat was posted to the internet in 2012, her name and likeness spread like wildfire …. Grumpy Cat has since appeared in numerous major television shows (including Today, Good Morning America, American Idol, and The Bachelorette), been featured on the front page of major periodicals such as The Wall Street Journal and New York Magazine, starred in advertisements for Cheerios and McDonalds, starred in her own Lifetime Television Christmas movie, “authored” three (3) books that debuted on the New York Times bestsellers list, and even has her own animatronic waxwork at Madame Tussauds in San Francisco. Accordingly, there is substantial consumer recognition, good will and monetary value in the famous Grumpy Cat brand.

Earlier this week, a small part of that monetary value was set at $710,000 by a Los Angeles jury.

According to this report, Grenade Beverage struck a $150,000 deal with Grumpy Cat’s handlers to use the cat’s face on a line of iced coffee beverages it called as “Grumpy Cat Grumppuccino.” Grumpy Cat Limited sued in 2015, alleging that Grenade went beyond the scope of the licensing agreement, creating and selling other Grumpy Cat branded products including roasted coffee and “Grumppuccino” t-shirts, and even registering and using the domain www.grumpycat.com. 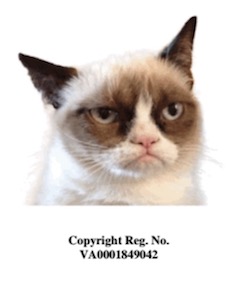 The image Grumpy Cat submitted to the U.S. Copyright Office

“Ironically,” the complaint began, while Grumpy Cat is usually invoked “in a tongue-and-cheek fashion,” the defendants’ “despicable conduct here has actually given Grumpy Cat and her owners something to be grumpy about.” The complaint asserted several claims for relief including copyright and trademark infringement, breach of contract, and cybersquatting. Grenade cross-complained, alleging that Grumpy Cat’s owners had failed to promote the coffee product to the extent promised, and also told Grenade falsely (or just incorrectly) that Cat would be starring in a movie with Will Ferrell and Jack Black.

The complaint is very well drafted. Grumpy Cat has excellent lawyers. But even they were unable to resist writing “three (3),” a thing that lawyers persist in doing for some inexplicable reason. Also, the phrase is “tongue-in-cheek,” not “tongue-and-cheek.”1 But these are very minor issues in what is overall a very good example of the genre. They didn’t write, “Grumpy Cat Limited (hereinafter, ‘Grumpy Cat’),” for example, and that alone puts this in like the 95th percentile, in my opinion.

Anyway, the jury reportedly awarded Cat $710,000 for infringement, and a nominal award of $1 for breach of contract.

I have, of course, used two images of Grumpy Cat without her express permission (or that of the photographer(s)), but I think it’s defensible here under the “fair use” doctrine. That doctrine has four elements: (1) the purposes and character of the use, (2) the nature of the copyrighted work, (3) the amount and substantiality of the portion taken, and (4) the effect of the use upon the potential market.

Here, I am not trying to sell the images or pass them off as my own, I am just using them to illustrate what is hopefully a humorous and possibly even mildly educational commentary upon the Grumpy Cat case. (I mean, here I am telling you about the fair-use doctrine and so forth.) I transformed the main image to some extent by memeifying it, not that doing so is an automatic defense by any means. Probably most importantly, I’m pretty confident that using the images here has no chance whatever of affecting the market for Grumpy Cat-branded merchandise, except possibly for very slightly enhancing it.

So that will be part of my defense, if I get sued by this cat.

1 Somewhat similarly, the correct phrase is “set foot in,” not “step foot in,” and feel free to fight me on either one of these but you will be wrong. (This wasn’t in the complaint, it’s just something else that bugs me.)

“Citizens” Know More About Simpsons Than About First Amendment