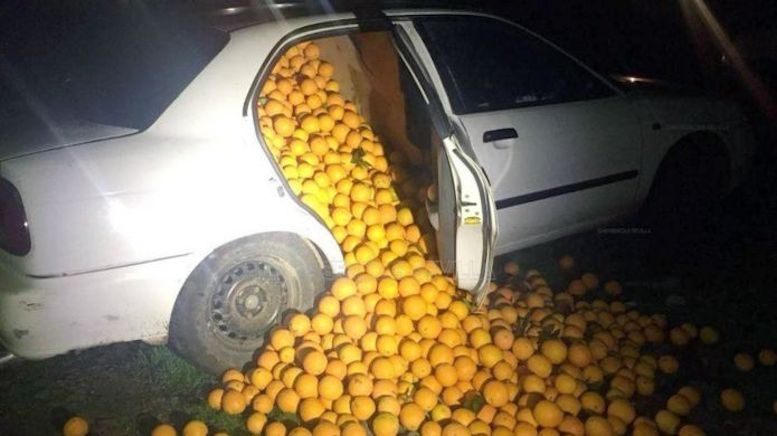 I was going to do this whole thing in Spanish, but you know what? It takes long enough to do this en inglés, so the headline is going to be it, amigos.

In the not-unlikely event I have botched that headline, what happened is that about three weeks ago, Spanish police stopped two vehicles after noticing that (1) they were being driven erratically and (2) they were full of oranges. Of course, it is not illegal to possess las naranjas, but by “full of oranges,” I mean full of oranges, as in four metric tons of oranges. That’s a lot of oranges, so many that police reasonably believed an explanation was in order. And guess what? No explanation was forthcoming. And so according to the BBC, “[f]ive people were arrested when they could not explain where the oranges had come from.”

Actually, they had explanations, they just didn’t have any good ones:

One suspect said they had picked them up from the ground…. The suspects told police they had been collecting them as they travelled from a long way away, according to Europa Press. They added that they were carrying them for their own consumption. 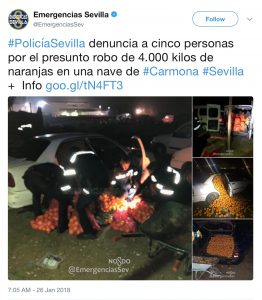 We just like oranges, officer. Sí, nos gustan mucho las naranjas. No, of course we didn’t pick these up all at once, we’ve been doing it for the whole trip. Yes, it has been a long trip, now that you ask. And, well, we didn’t want to get scurvy. Yes, our concerns about scurvy explain why we have collected oranges at every opportunity during this extremely long trip of ours.

According to the USDA, an average medium-sized orange weighs about 131 grams. That seems like a pretty precise number for an average, frankly, but that’s what the USDA says. So assuming the total estimate of four metric tons of fruit is correct, that would mean these travelers had gathered about 30,534 oranges during this trip of theirs. Now, the phrase “collecting them as they traveled” suggests that they were spotting these individually and stopping to pick up each one. But even assuming that took only 30 seconds per orange, which I think is pretty darn conservative, it would have taken them more than 254 hours to collect that many, or more than ten days doing nothing but collecting oranges, presumably driving in shifts.

And that, of course, assumes the oranges were just spaced out along the road waiting to be collected. Even if they were all in one place—such as, let’s say, in the nearby fruit warehouse that turned out to be about four metric tons short—picking up that many oranges would have been a daunting task. Each of the five travelers would have had to pick up 6,107 oranges, and at four seconds per orange you’re still looking at a seven-hour project there. But doable, and the police, at least, believed that’s what they had in fact done.

Math also would not be kind to the suspects’ claim that the oranges were just “for their own consumption,” but like I said, this takes long enough as it is.

How to Avoid Jury Duty, #8: Be Pals With a Serial Killer