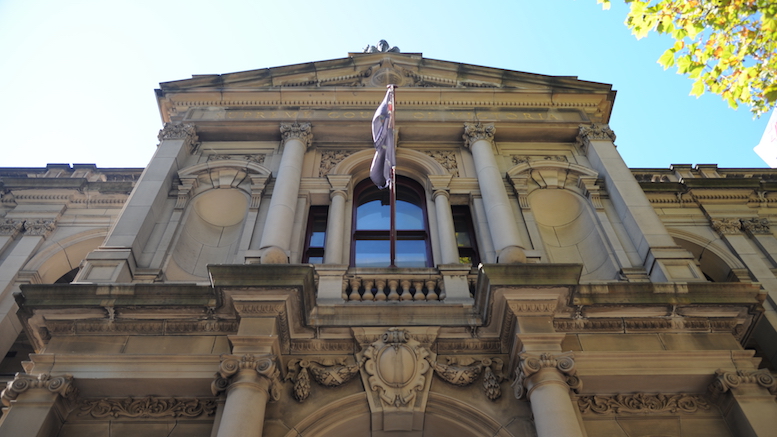 Facade of the Supreme Court of Victoria (image: Wikipedia)

It looks like “Peter Brown” is a pretty common name in Australia, or at least it was at one time. (“Peter” hasn’t been among the top 100 baby names there recently, but these things change over time. The most popular name last year for males, at least in South Australia, was “Oliver,” joined in the top 100 by “Archer,” “Arlo,” “Xavier,” “Jaxon,” “Hamish,” and “Bodhi,” among others.) Even a quick Google search reveals many Australians named “Peter Brown”: several CEOs, an anthropologist, a deputy editor at the Daily Telegraph, a linguist, a 19th-century colonial secretary, and at least six Australian-rules footballers famous enough to be listed on Wikipedia.

And at least two criminals by that name currently being held in Victoria, which we know because prison officials there keep bringing the wrong one to court.

He (or she) knew this immediately because it wasn’t the first time the corrections department had brought them the wrong Peter Brown.

The judge in the case, Justice John Champion, expressed some frustration that Corrections had brought in the wrong defendant in a murder case not once, but twice. He was unimpressed with the department’s performance, and what particularly unimpressed him was that no one from Corrections had shown up to explain:

Justice Champion said he was at a loss to understand what had occurred, particularly given it was the second time this had happened in this case.

“What particularly unimpresses me is I don’t detect anyone here from Corrections,” he said. “They haven’t had the courtesy to appear before the court, knowing the mistake had been made.”

Corrections Victoria’s original statement didn’t do much to clarify what had happened.

“Due to a case of mistaken identity, Corrections Victoria delivered the wrong prisoner to a court hearing this morning,” it said in a statement. “We apologise for the error and worked quickly to rectify it, with the correct prisoner now at court and the matter proceeding.” But again, “we had the wrong person because it was a case of mistaken identity” doesn’t really clarify what happened. You just said the same thing twice. According to a later report, though, a government solicitor did show up to apologize in person, “blaming a junior officer in training and an old computer system for the mistake.” How the “old computer system” was deficient remains unclear.

Peter Brown the murderer (eventually identified as Peter Raymond Brown, though we don’t know the other guy’s middle name) eventually got 30 years in prison for his crime. According to the report, “[i]t was unclear what the other Peter Brown is being held for.”