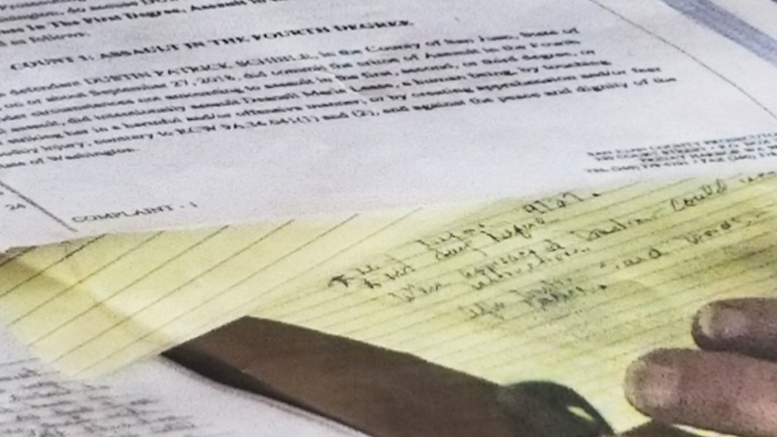 Well, this is certainly a puzzler.

According to The Seattle Times, the sheriff of San Juan County, Washington, admitted that he had, from his office, “manipulated” a courtroom surveillance camera “in such a way that it zoomed in on one or more locations in the courtroom” during a criminal trial, but insisted the manipulation was “inadvertent” and that he did not read anything he might have seen while doing it. He did not even know the camera had a zoom function, he reportedly told the court.

And as for how and why it had zoomed in on defense documents and at least one juror’s notebook during the trial, well, who can say?

The inadvertent zooming manipulation came to light during a misdemeanor criminal trial last Thursday. According to the Times, Judge Kathryn Loring was working on a different case and happened to be at the court administrator’s desk while the trial was proceeding. The administrator has two computer monitors, one of which shows the view from security cameras around the courthouse. Judge Loring noticed that one of the normally stationary cameras was moving, further noticed that it was the camera located over the jury box inside the courtroom, and then even further noticed that “it was panning, tilting and zooming in on the jury box and counsel tables.” She notified the trial judge, Don Eaton, who promptly sequestered the jury and held a hearing to find out what the $&#* was going on. Following the hearing, which involved testimony by Judge Loring, the court’s IT person, and the sheriff, the trial judge dismissed the case.

Judge Eaton recited some of the facts after the hearing, according to the San Juan Islander:

During the testimony portion of this jury trial …, the security camera in District Court was remotely manipulated in a manner that caused it to pan and tilt and zoom from its default setting on four different occasions. It focused closely first of all on the notepad of Juror #3, then panned and tilted and focused closely on an illustrative aid that the prosecuting attorney was using … [T]he words that appeared were clearly legible.

The camera then “focused closely” on some of the prosecutor’s documents, which like the exhibit mentioned above would not be the primary concern. But then it moved on:

[I]t zoomed back out and then panned to the left to the defense counsel’s table and zoomed down directly on [her] yellow legal pad…. In addition to handwritten words on the legal pad, also visible was the hand of the defense attorney and the pen she was holding and a portion of a typewritten pleading document…. After lingering on [the] pleading and the handwritten notes, [the] camera zoomed back out and eventually assumed more or less its default position.

According to this report, the sheriff admitted he personally had zoomed in on the prosecutor’s documents, and his testimony “suggested he also focused on the juror’s notebook.” Oddly, the judge “said there hadn’t been testimony to determine exactly who caused the focus on defense counsel’s notebook”—though that seems like kind of an important question someone should have asked—”but it was clear that it was done by a state actor—either someone in the San Juan County Sheriff’s Office or someone in the IT department.” Most likely, Judge Eaton understandably concluded, “all these manipulations were done by someone in the San Juan Sheriff’s office  as opposed to someone in the IT department. In either event, they were state actors,” and so the possibility of misconduct justified a dismissal of the charges.

It seems likely that at least in this particular case, the result was an “appearance of impropriety” thing rather than a situation where confidential information was actually shared with the prosecution. The county prosecutor said no one in his office had ever received information in this way, nor would they accept it if they had. But he is also opposing a request that the video be unsealed so the public can see what the camera operator, if any, may or may not have inadvertently seen. He argued, apparently, that releasing the video “could expose weaknesses in court security,” but it’s a little late for that.

In any event, there is a more interesting question still to be answered, namely why the sheriff can control a courtroom camera from his office:

[I]n filings seeking to make the courtroom video public, [civil-rights lawyer Nick Power] said the hearing raised still unanswered questions, including why the camera in the district courtroom has zoom capabilities at all or whether the cameras can be controlled remotely from other county terminals. The security cameras in the other courtrooms and elsewhere inside the courthouse do not have zoom, tilt or pan capabilities, according to the documents.

As far as we know.

A hearing on whether to unseal the video is scheduled for February 12.