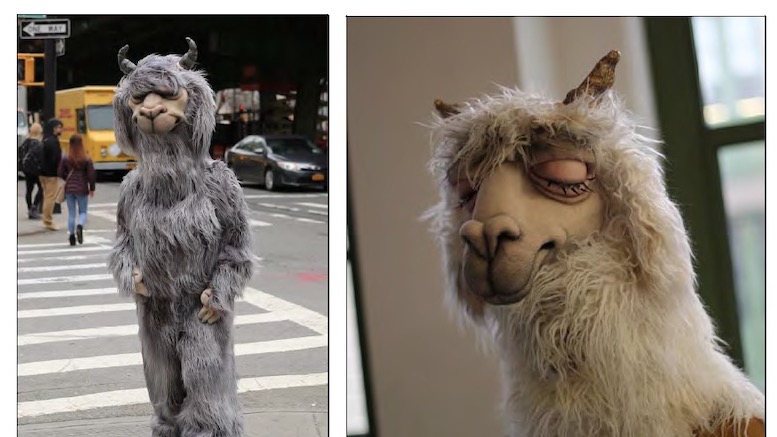 As some of you may know, the band Fall Out Boy released a video for their song “Young and Menace” in April 2017, and that video featured “two striking and unique wearable, llama-like puppets” (see above) created by the appropriately named Furry Puppet Studio. According to Furry Puppet Studio, in fact, said puppets will be “instantly recognizable” to any fan. Indeed, they have since become “central to Fall Out Boy’s identity, brand, and music”—which is a problem, again according to Furry Puppet Studio, because it created the puppets only for that video, retained the copyright, and never agreed to any other use for them.

Hence, Fall Out Boy “was (and is) exploiting the llamas by infringingly reproducing and displaying the puppets as merchandise” and otherwise using them in connection with its ongoing activities. So alleges Furry Puppet Studio in this 133-page complaint, filed in the Southern District of New York on Monday (Billboard). FPS is charging FOB with copyright infringement, breach of contract, and various other things as a result of the alleged llama exploitation.

The complaint includes several images of what at least appear to be the puppets in question, which FOB allegedly named “Frosty” and “Royal Tea” and made “de facto members of the band.” Some of the images could just be regular cartoon-llama images, but in context they are probably meant to represent the wearable puppets.

I think that in general, a “work for hire” belongs to the hiring party after it’s created, but Furry Puppet alleges that this was not the arrangement they reached. “At most,” it alleges, “Plaintiff gave an implied limited nonexclusive license” to allow the band’s production company to use the llamas for the 2017 video, and nothing further. Apparently the company had requested simply “monsters of some sort” for the video, and Furry Puppet claims it created the “llama-like monsters” that resulted on its own. “No person or entity other than Plaintiff had any involvement in the process of creating the llamas,” it alleges, “except to specify that the puppets should be monster-like.”

Nor could it have anticipated, barring “omniscient clairvoyance,” that Fall Out Boy would exploit the llamas to the degree it has, according to the complaint.

This probably comes down to the scope of whatever agreement the parties reached when the llamas were created, and if there was some sort of written license agreement, it’s not attached to the complaint (nor did I see it mentioned, unless I missed it). That would make proof more difficult but certainly not impossible. I guess we shall see.

Billboard points out that Furry Puppet’s lawyer is the same guy who sued Led Zeppelin for allegedly stealing part of “Stairway to Heaven” (see “Led Zeppelin Admits ‘Exceptional Talent,’ Denies All Other Allegations (May 29, 2015)), so make of that what you will. I didn’t think there was anything to that case, but it’s gotten further than I thought it would.

Good Reason to Kill #7: Disagreed With Your Macaroni Recipe