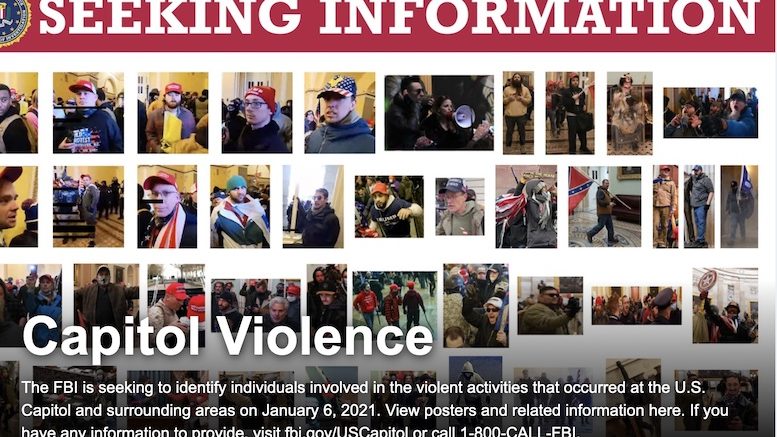 The Gang That Couldn't Not Incriminate Itself (image: FBI.gov)

I guess the worst thing about a mob of armed thugs storming the U.S. Capitol isn’t that it’s distracting me from the piece I want to write, namely the one about the naked Australian fugitive who had to be rescued from crocodile-infested waters the other day. But it is in fact doing that.

Just one of the many injuries that could’ve been avoided if the current semi-President had been removed in a timely fashion.

The only good thing I can think of about the tsunami of stupid that crashed into Capitol Hill on Tuesday is that so many of those idiots posed for pictures or appeared in videos that show them committing one or more crimes. In most cases, they are easily identifiable in these images, often because they posted the evidence against them to their personal social media accounts. As we have discussed many times before, that is a very stupid thing to do. So it isn’t too surprising that it happened so often the other day.

Just to get this out of the way, simply being part of a mob that breaks into the Capitol building is in fact a crime, and probably several crimes. For example, it shouldn’t surprise anyone that there are lots of things that are unlawful to do on U.S. Capitol grounds, and look! One of them is to “knowingly, with force and violence, enter or remain on the floor of either House of Congress.” 40 U.S.C. § 5104(e)(1)(B). It’s also unlawful just to be on the floor or in the gallery or meeting rooms or Congressional offices without authorization. 40 U.S.C. § 5104(e)(2). Those are misdemeanors, unless the violator was armed with a dangerous weapon (as some of these people were), in which case it’s a felony.

More significantly, conspiring to do this sort of thing in an effort to overthrow the government, or use force to prevent, hinder, or delay the execution of any federal law—and that was the whole point of attacking Congress on Tuesday, when the electoral votes were to be certified—is “seditious conspiracy” punishable by up to 20 years in prison. 18 U.S.C. § 2384. Granted, “sedition” charges are something we should be cautious about, and they shouldn’t apply very often, but then armed mobs only storm the Capitol every 200 years or so. And, for similar reasons, this fits within the definition of “domestic terrorism,” defined as criminal acts dangerous to human life that “appear to be intended … to influence the policy of a government by intimidation or coercion” (18 U.S.C. § 2331(5)), which again is the whole reason they were there.

Oh, there’s also the federal Anti-Riot Act (18 U.S.C. § 2101, up to five years), and I feel pretty confident in saying that the rioters violated that one. See 18 U.S.C. § 2102 (defining “riot”). Under federal law, it only takes three people to constitute a riot (in California and many other states, it only takes two), so that isn’t an issue.

And those are just some of the crimes they committed simply by being part of the riot. Of course individual rioters might have committed other crimes like willful injury to government property (18 U.S.C. § 1361); assault (18 U.S.C. § 113); or, let’s see, murder or manslaughter (18 U.S.C. § 1111–12), since they killed a police officer; and/or the state or D.C. equivalents. And there may well be self-posted images proving they did those things. But here I’m just talking about the many images of people being part of the mob, which under the circumstances are in and of themselves evidence of a crime. My point is, unless you’re pretty damn confident you’re going to successfully overthrow the government, and these idiots had zero chance of that, you probably shouldn’t make it easy to identify yourself while trying to do so. And yet, many did exactly that:

This list is expanding very quickly, according to this Washington Post report among others. As of Thursday, more than 70 people from at least 20 states had been arrested and charged. In addition to the idiots above, the report identifies several others who were hoist on their own electronic petards:

Here’s the thing: if you participated in an attack on the U.S. Capitol as part of a riot and/or seditious conspiracy, decided to commit other crimes while on the premises, and you posed for and/or posted images that show you committing such crimes, images that will spread like wildfire across the internet, taking the street numbers off your house is not going to solve your problem. But that seems to be about right in terms of the reasoning power at issue here. So, idiots, you should avoid doing the crimes at all, of course, but if you must, please continue to take credit for them on social media. I’ll try to do my part in getting you the attention you deserve.