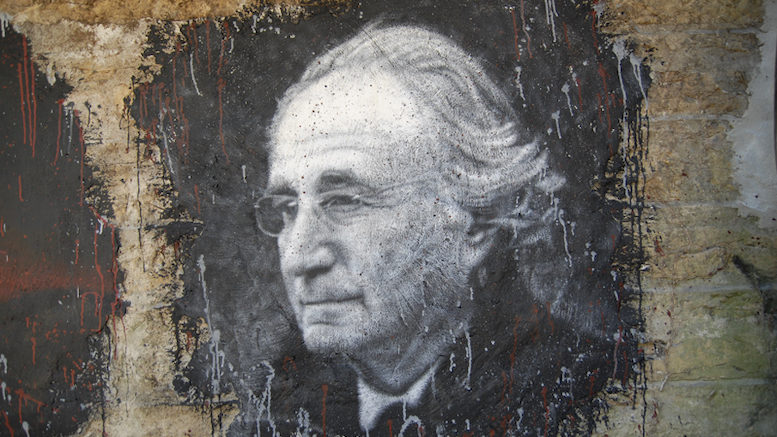 If a flag near you is at half-staff today, it’s not because of the death of Bernard L. Madoff, who croaked on Wednesday at the age of 82. By dying, Madoff managed to avoid serving the remaining 139 years of his sentence, which, as you may recall, he received for running the largest Ponzi scheme in history. That scheme cost his victims at least $17 billion, not counting the profits they might have made if they’d actually been investing their money and not just giving it to Bernie Madoff.

The New York Times article linked above gives a fairly complete overview of the saga, although it leaves out a few details I think are important. Madoff—who the Times says once spent “an uninspired year in law school,” something I didn’t know—ran his scheme for decades, paying existing investors not with earnings but with money he was taking in from new investors (the definition of a Ponzi scheme). Pretty much every Ponzi scheme falls apart eventually, because the number of potential victims is less than infinite and so sooner or later, the schemer runs out of income. Madoff’s scheme fell apart as a result of the financial crisis in 2007–2008, and $64.8 billion in what were supposed to be assets instantly vanished. Thousands of victims lost their savings, some lost their homes, three people committed suicide (including one of Madoff’s sons), and one died of a heart attack attributed to the stress.

Madoff later expressed remorse for what he had done to his victims. Specifically, he did that twice: once just before he was sentenced, and again in February 2020 when he was seeking early release due to illness. (It didn’t help either time.) But at other times, he seemed somewhat less remorseful. See “‘F— My Victims,’ Says Bernie Madoff, Enjoying Prison” (June 8, 2010). Yes, “f— my victims,” Madoff reportedly said shortly after beginning his sentence, when another inmate “badgered” him on that subject, according to an article in New York magazine. “I carried them for 20 years, and now I’m doing 150 years.” 150 is more than 20, you see, so that’s completely unfair. “People just kept throwing money at me,” Madoff told his prison consultant (he had a prison consultant), and he couldn’t very well not take it, could he?

What he did with that money was the topic of another article here, which I wrote after learning that the U.S. Marshals Service was auctioning off a bunch of his possessions to try to recover at least some of the money for his victims. See “Buy Some of Bernie Madoff’s Stupid Crap This Weekend” (Nov. 12, 2010). Just to touch on what some of that stupid crap was, Madoff owned a stuffed alligator, dozens of watches, 67 belts, over 200 pairs of shoes—including 88 identical pairs of a brand called “Mr. Casual Belgium”—and one presumably non-functional crystal ball.

Still alive for now (in an undisclosed location within the federal prison system) is fellow Ponzi schemer Scott Rothstein, who stole less money than Madoff (less than $2 billion, in fact), but whose story I think is more amusing. You may recall, for example, his gold-plated toilet, his decision to flee to Morocco, his decision to come back from Morocco, and his statement that he asked his partners not to deal drugs from their law office for the very good reason that, as he put it later, he was trying to run a “giant Ponzi scheme” out of that office and didn’t want them screwing it up.