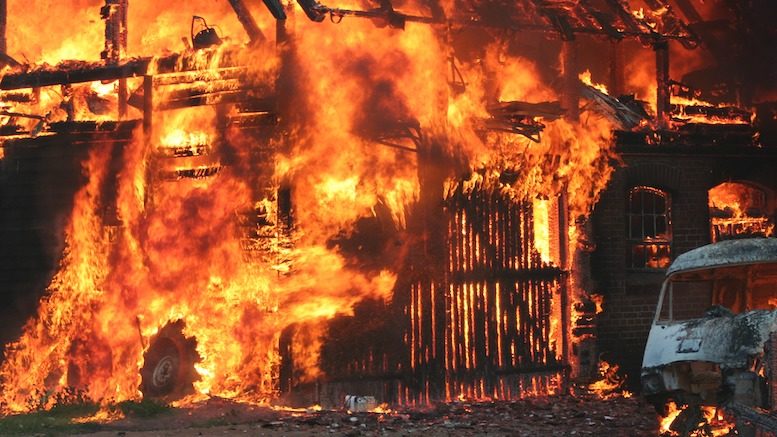 Technically, only one of them has said this, because the other one is still at large. But I’d be willing to bet that he tells the same story.

On March 29, the Louisiana Department of Agriculture and Forestry said in a press release that two people in Vernon Parish had been accused of setting multiple fires along a roadside and in the woods near their home. One of the suspects, a 34-year-old woman, had been arrested, but her 34-year-old boyfriend was still on the run (or at least he had not been located—he might just be lost). According to the press release, “[i]nformation obtained during the investigation revealed the reason for setting the fires was to get rid of snakes near the property.” (For some reason, the press release uses the passive voice even though it seems pretty clear that the only possible source for this information was the suspect herself.)

The suspects have been charged with “simple arson,” which under Louisiana law is defined as “[t]he intentional damaging by any explosive substance or the setting fire to any property of another, without the consent of the owner….” La. R.S. § 14:52. It doesn’t appear to be a crime to set fire to your own property, unless “it is foreseeable that human life might be endangered,” in which case it’s “aggravated arson,” or you did it with intent to defraud. So if snakes got into your house, for example, it might not be a crime to set it on fire to get them out. The problem here is that these people set at least some of their anti-snake fires on land owned by others, without the consent of those people.

The reports don’t say whether the suspects bothered to ask their neighbors about this in advance, but it seems unlikely.

Even if the property of others is not involved, setting an area on fire doesn’t seem like the best way to deal with a snake problem. (I ran a number of searches for the term “how to get rid of snakes,” and “set the whole area on fire” was not among the results.) It might work at least temporarily, because snakes will move away from fire just like any other animal. But it’s unlikely to kill them. According to one expert, a study of a wildfire’s effect on different animals showed that in a population of diamondback rattlesnakes, “the only mortalities were individuals in the midst of shedding their skin, which may have impaired their ability to sense or escape from the fire.” So most snakes will get away. When the fire is out, they’re likely to come back for whatever reason they were there in the first place. And then they’ll also be pissed off. Also, of course, there’s the problem of controlling the fire, which is very likely to end up being a bigger problem than the snakes were.

That was the problem in the 2014 case of which this reminded me, although that one didn’t involve an attempt at pest control. That was a Michigan case in which insurers were suing to recover $2 million they paid out for damage to an apartment building, which caught fire after a guy set down a blowtorch he had been using to burn the hair off a squirrel he was planning to eat. See “Insurers Demand $2 Million for Negligent Squirrel-Torching” (Apr. 6, 2014). He apparently didn’t have any assets to speak of, which was unfortunate for his girlfriend at the time, whose lease agreement made her liable for damages caused by her guests.

So I guess the lesson here is that while fire is certainly useful, it can also be dangerous and uncontrollable, so it should probably be a last resort as a method of pest control. Or squirrel preparation. Things can escalate quickly.

If There Is An Earthquake While You Are Taking the Bar Exam, Do You Get Extra Time?

“The Cause of Action is Denied as Unintelligible”