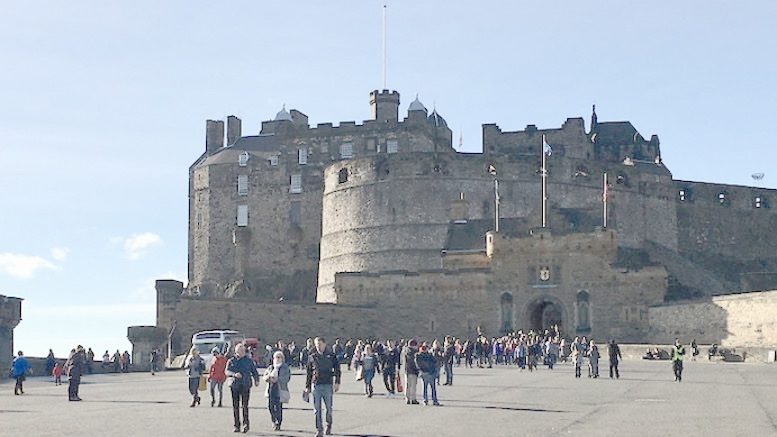 Look, we’ve been over this before: If the question is “why do you think you can do that,” then “Magna Carta” will almost always be the wrong answer. See, e.g., “Your Honor, I Direct You to Article 61 of the Magna Carta” (Sept. 2, 2020). And if they didn’t accept that answer in Canada, named Politest Country in the World every year since 1931, they’re not gonna accept it anywhere else.

But on Tuesday evening, sources reported that a group of about 20 people had entered Edinburgh Castle without a ticket and declared that they were claiming it on behalf of “the people” under the authority of Article 61 of the Magna Carta. We’re “taking our power back,” she said in this Facebook Live video, as police pretended to read what can only have been some sort of incomprehensible manifesto. The “building belongs to us, we have taken the castle back,” she said, declaring that this was part of an effort to “restore the rule of law.” And granted, any serious effort to restore the rule of law is going to start with suddenly seizing property on dubious legal grounds, but this group clearly did not have sufficient numbers, weapons, or intelligence to finish the job.

“Treason’s been going on for [so] long now,” another man said in the video, “we can’t sit back and let everybody perish under the stupid legislation and fraudulent government tyranny, so let’s just take it all back, not just the castle.” That makes him the Lenin of this group, I suppose, although if you think I’m going to stay up late tonight actually trying to figure out which Bolshevik would be the most analogous, think again, my friend. Lenin it is.

Again, we’ve already talked about Article 61, which as you know was an effort by the barons to ensure that those who wanted to get inside Edinburgh Castle would not be charged an admission fee, or at least could get a stamp or something so they wouldn’t have to pay twice if they came back the same day. But it was also an effort to deter King John from trying to weasel out of the deal by providing for a sort of baronial enforcement committee. If the King should “offend in any respect,” and said offense was reported to at least four of the 25 barons involved, they could demand redress, which the King had 40 days to provide. If redress was not forthcoming, then all 25 barons would get involved, and the King promised they could “distrain upon and assail us in every way possible, with the support of the whole community of the land,” by seizing any of the King’s possessions, including—you guessed it—castles. “Having secured the redress,” this paragraph concluded, “they may then resume their normal obedience to us,” and bygones would presumably then be bygones.

You know how you’re sometimes stuck writing something by committee, and there’s that one guy who has an idea that’s stupid but he just won’t shut up about it, and finally everybody else realizes that it’ll be a lot easier to just put his stupid idea in there so you can all move on with your lives, and it won’t cause any harm because it’s an obvious non-starter that nobody’s ever going to bother with anyway?

Pretty sure that’s how we got Article 61.

As I mentioned before, it’s not even in later versions of the Magna Carta, not even the 1216 revision just one year later. And in any event, while a few Magna Carta clauses technically are still in force, those are from the 1225 charter, not the original. In short, to recycle and just slightly update the joke I used last time, the Article 61 argument, “based on an [806]-year-old document, has been wrong for at least [805] years.”

Just to pile on further, John was the king of England. So even if this argument that’s been wrong for over eight centuries was right, it would still be wrong in Scotland, which is where Edinburgh Castle turns out to be. Given their accents, I assume these people knew they were in Scotland, so there must be some other explanation for this mistake.

Don’t let these people deter you from visiting Edinburgh, which is great in general, and Edinburgh Castle in particular, which is terrific. It’ll cost you 15 pounds or so to get in, unless you can convince them you own it, but if not it’s still totally worth it.