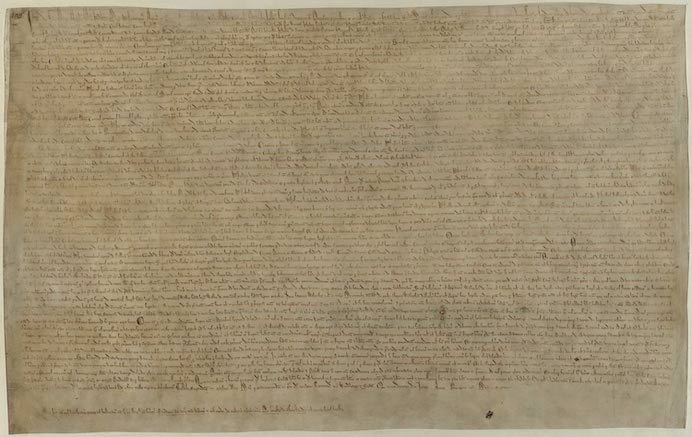 What is “pseudolaw”? Well, from the name you might think it is sort of like law, but isn’t. And you would be right:

Pseudolaw is a collection of spurious legally incorrect ideas that superficially sound like law, and purport to be real law. In layman’s terms, pseudolaw is pure nonsense.

We have seen many practitioners of such pseudocraftiness over the years, including but not limited to the King of Australia, the Republic of Scott, former tax-evader Winston Shrout, a self-proclaimed agricultural product, that Florida couple who tried to secede, and more recently, the Department of Justice. Now another person joins this less-than-illustrious list.

According to the National Post, Jacquie “Phoenix” Robinson told a court in Alberta that she and her “client” are not subject to Canadian law because they have “pledged allegiance to a British lord and invoked an article of the Magna Carta.” It makes perfect sense to me, but the court seems to have disagreed. In its opinion, in fact, the court presents this as a “third wave” of pseudolaw, saying the first two were the “Detaxers” and the “Freemen on the Land.” I’m not sure it makes sense to divide them into waves, since their arguments tend to overlap significantly. But according to the court, this new form has been plaguing courts in Alberta more and more over the last few months. Specifically, this form:

These documents are emblazoned with a strange crest titled “Practical Lawful Dissent.” … The authors of these items declare that they have sworn an oath of allegiance to Lord Craigmyle of Invernesshire, and say that on that basis they are outside Canadian law. This extraordinary claim is allegedly the result of Article 61 of the 1215 Magna Carta and the actions a group of rebel barons whose resistance to Crown treason, strangely enough, began in 2001, almost eight centuries after the death of King John in 1216.

WTF is all that about, you ask? Well, Justice Graesser had the same question. He investigated, and his opinion carefully (and amusingly) takes this claim apart in detail. It is worth reading. But allow me to summarize.

You may recall that the Magna Carta was an agreement that a group of barons forced King John of England to sign a while back. It famously stands for the principles that the king is not above the law and his subjects have certain guaranteed rights, although for the most part the relevant subjects turned out to be barons. The provision referred to as “Article 61,” near the end, was an attempt to provide a little insurance in case the king tried to weasel out of the arrangement:

The barons shall elect twenty-five of their number to keep, and cause to be observed with all their might, the peace and liberties granted and confirmed to them by this charter.

If we, our chief justice, our officials, or any of our servants offend in any respect against any man, or transgress any of the articles of the peace or of this security, and the offence is made known to four of the said twenty-five barons, they shall … declare it and claim immediate redress. If we … make no redress within forty days, … the four barons shall refer the matter to the rest of the twenty-five barons, who may distrain upon and assail us in every way possible, with the support of the whole community of the land, by seizing our castles, lands, possessions, or anything else saving only our own person and those of the queen and our children, until they have secured such redress as they have determined upon. Having secured the redress, they may then resume their normal obedience to us.

Any man who so desires may take an oath to obey the commands of the twenty-five barons for the achievement of these ends, and to join with them in assailing us to the utmost of his power. We give public and free permission to take this oath to any man who so desires, and at no time will we prohibit any man from taking it. Indeed, we will compel any of our subjects who are unwilling to take it to swear it at our command.

Basically, the barons got the right to file a grievance, and if the king didn’t redress it within 40 days, they could start a war. And anybody could join in on that if he wanted, by swearing an oath to obey the barons when they told him to assail something. This, apparently, explains the “oath of allegiance to Lord Craigmyle of Invernesshire” mentioned above. These people claim to be joining up with the barons, a right they say is guaranteed by Article 61.

Why Lord Craigmyle? Nobody really knows. In 2001, he was one of a group of peers in the House of Lords who signed a letter asking the Queen not to agree to a treaty that increased the power of the EU’s parliament. They mentioned this provision of the Magna Carta in doing so. This, supposedly, was the declaration of war mentioned above. Somehow, Craigmyle became seen as the representative of this group (which the opinion calls “the new rebel barons”), and people swear oaths to him personally. There’s a YouTube clip in which he says he has received hundreds if not thousands of letters from people over the years in which they swear allegiance to him. He seems very confused about the whole thing.

So, did you see the part where it mentions not being subject to Canadian law? No? Hm. Well, that could be partly because it was written in 1215, when the English didn’t even know where North America was, let alone the part that’s now Canada. And English law didn’t apply there anyway until 1763 (give or take), by which time there had already been a few changes to the rules that were in effect half a millennium earlier. There have been even more changes since then, including Canada now being independent of the UK. Or, as the justice puts it, even if the Article 61 theory were correct, “[w]hatever does that have to do with Canada? Absolutely nothing.”

A related flaw is that there were later versions of the Magna Carta, including one the following year, and none of them include Article 61 (everyone probably having realized it was a stupid idea). In other words, Phoenix’s legal argument, based on an 805-year-old document, has been wrong for at least 804 years.

There are many other flaws, too many to include here. The opinion goes into great detail not because that’s necessary to dispose of this case, but (as in a prior decision, Meads v. Meads) the court believes it’s helpful to deconstruct the argument in order to debunk it. It won’t stop the nonsense—nothing can do that—but it may deter at least some people from wasting their time with it. Also, we get an opinion that includes some interesting historical facts, and, again, is definitely worth reading. “Robinson appears to have sworn herself to be a loyal servant to Lord Craigmyle of Invernesshire. So what?” Good question.

Is It Illegal to Use a Legal Name?

Nightmares About Your Job May Suggest You Need a New One, Says ABA