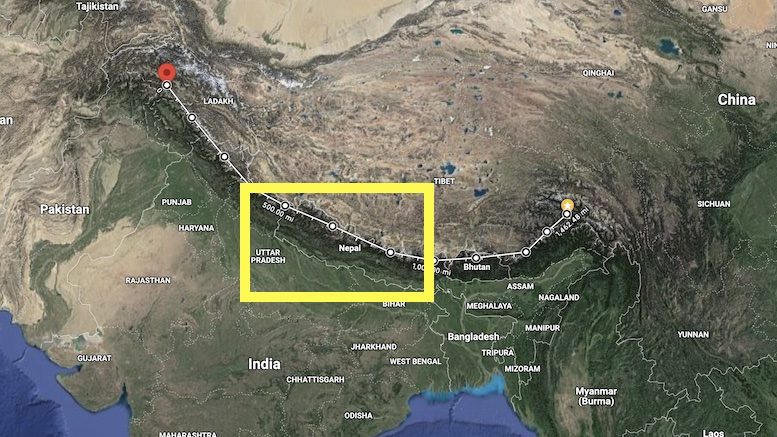 It's probably in there somewhere

As you know, the Himalaya Mountains contain most of Earth’s highest peaks. The name is said to come from the Sanskrit Himālaya, meaning “abode of the snow.” This mighty range, up to 200 miles wide, runs for about 1,500 miles from Nanga Parbat in Pakistan to Namcha Barwa in Tibet, also looming over Pakistan, China, Nepal, India, and Bhutan along the way. That would put the heart of the Himalayas somewhere in Nepal.

Mountain ranges don’t actually have hearts, because they are not animals. No, they are made of rocks and dirt. Also a lot of frozen poop, it turns out, but even around Mount Everest any given volume of mountain will consist almost entirely of rocks and dirt. Like, at least 85 percent of it. The point is, they do not have hearts.

Of course, the word “heart” can also be used in a geographical or metaphorical sense to mean the central or innermost part of something. A mountain range could have a “heart” in that sense, but how would you find it? As you may have noticed, mountain ranges tend to be irregularly shaped, so it’d be hard to find an exact center. Different people would reach different results. There’d be even less agreement over finding the metaphorical “heart” of a terrain feature. Is the “heart” of the Rockies in Colorado, or is it further to the northwest where the middle of the range would be on a map? If it’s in Colorado, is it in Denver, which has most of the people in the region and (arguably) a sports team called the “Rockies,” but isn’t actually “in” the mountains at all? Or is it three hours to the southwest in the town of Salida? That’s where Salida thinks it is. Who’s right?

Nobody. But also, nobody’s wrong, because this is a made-up thing with no objective definition. We could certainly argue about it, but no reasonable person would, for example, file a lawsuit over it.

But of course somebody has.

On October 10, Stefany Mogollon sued Costco in the Southern District of New York, alleging that Costco’s “Ground Himalayan Pink Salt” product is deceptively labeled. “Himalayan salt” is apparently a thing now, for reasons I don’t claim to understand. (I did recently and coincidentally discover that Costco’s “Himalayan Salt” kettle chips are the best potato chips yet developed by the human race, though I neither know nor care whether this has anything to do with the salt itself.) Is “Himalayan salt” a real thing? Yes, depending on what you mean by that.

Salt can be found all over the planet, and I just learned the most significant source of it is in Canada, namely the Sifto Salt Mine, which is one-third of a mile under Lake Huron and produces over 7 million frigging tons of rock salt every goddamn year. But what about the Himalayas? Again, yes, depending on what you mean by that.

This term seems most often applied to salt from Pakistan’s (appropriately named) Salt Range. (The Khewra Salt Mine there is the world’s second largest.) This salt has certain trace elements that can give it a pink or reddish color, but it’s otherwise just salt. Ooh, but is it from the Himalayas? Well, arguably, no. The Salt Range is about 200 miles southwest of Nanga Parbat, which, if you were paying attention above, you know is arguably the northwest end of the Himalayas. The Salt Range consists of low mountains or high hills, so that might count, but there seems to be some more flattish space between these and the main range, so … no? But they are a raised area in the western Himalayan region, and now that I zoom in more, the flat area doesn’t look too flat, and it’s all connected underneath anyway, so … yes?

Let’s move on from this question, though, because it isn’t at the heart of this lawsuit. Possibly because they realized it would be stupid to quibble about where exactly the Himalayas start and end, and because no reasonable consumer would care, these lawyers focus on something else. They note that the label includes a “colonial-era map of the Indian subcontinent, Sanskrit graphics,” and the phrase “comes from the heart of the Himalayan Mountains.” A “typical consumer,” they allege, not being “aware of the geography of the Himalayas,” would thus be led to believe that this Himalayan Salt comes from northern India, an area the “typical consumer” associates with the “mystical East”—a “mysterious, spiritual land, lost in time and hidden from a destructive modern world, a frontier zone par excellence” (quoting an article, not original work). Said consumer would therefore be willing to pay a premium for true Himalayan Salt.

Whereas all Plaintiff got is this boring and not at all mystical crap from somewhere in Pakistan, of all places. (Paraphrasing.) Plaintiff therefore paid too much, and would like her money back. Needless to say, she seeks to represent an untold number of similarly situated consumers.

Where to begin with how dumb this is? We might hark back, first, to what is probably still the dumbest example of this kind of litigation: the fictional-fruit cases. See “Reasonable Consumer Would Know ‘Crunchberries’ Are Not Real, Judge Rules” (June 2, 2009); see also “Another Consumer Says He Was Duped by ‘Froot Loops’” (Oct. 24, 2009). In at least nine cases, someone allowed their name to be put on a lawsuit alleging a cereal maker exaggerated the amount of real fruit in products that are—as judges pointed out—named for fruit that is not real. Even if the plaintiffs were dumb enough to believe that (again, paraphrasing), no “reasonable consumer” would; cases dismissed.

The “Hint of Lime” case I wrote about in June was also in that ballpark, I thought, but now this case has roughly shoved that one aside for second place.

This one will get thrown out (or should) for similar reasons: no reasonable consumer would rely on a representation that salt came from “the heart of the Himalayas.” Why? BECAUSE THERE ISN’T ONE. A reasonable consumer might not be fully “aware of the geography of the Himalayas,” but he or she would have a general idea; and more importantly, any dummy should know that “the heart of” a mountain range is not a specific location. There’s no objective way to determine where it would be, and so no way to prove or disprove this claim in court. The legal term of art is “puffery.” If someone says his product is “the best in the world,” don’t try to sue him pretending you will scientifically prove something else is better. It’s just something people say, on which no reasonable consumer would rely. That’s exactly what “from the heart of the Himalayas” is—puffery.

Wait—in paragraph 29, Plaintiff tells us specifically where the heart is: “not in Pakistan, but in Kumaon, India.” Well, that’s oddly specific. Let’s see. Kumaon, it turns out, is part of the northern state of Uttarakhand, which does indeed border both Tibet and Nepal. It’s maybe 50 miles from the first named peak I see on my map, so … is that even in the Himalayas? It looks bumpy there, but are those even mountains? Hard to say. Also, this isn’t in the center of the range, measured along a curve (see above). That’d be somewhere in Nepal. Kumaon isn’t in Nepal. It’s 350 miles from Kathmandu, and a ginormous 450 miles from Everest, the tallest peak on Earth and, and I have just now decided, the true “heart of the Himalayas.”

I will sue anyone who claims otherwise, and I have the same chance of winning as this plaintiff does.

Should I bother pointing out that the map of India on the label doesn’t include the Kumaon region, which Plaintiff presumably considered the heart of the Himalayas? Or that the label on the side says “a product of Pakistan”? No. It just seems like piling on at this point.