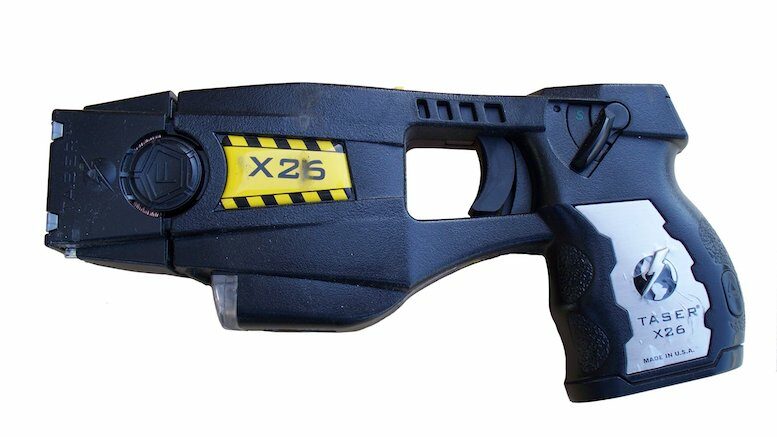 A Taser similar to the one that was deployed between this individual's lower extremities (image: Junglecat via Wikipedia, CC BY SA 3.0 (edited))

In what I did not even consider calling a “shocking development,” a federal judge has held that police officers may not be entitled to qualified immunity for an incident in which they lied about having probable cause to make a traffic stop, dragged the passenger out of the car, tased him repeatedly, including after he was handcuffed, and including at least once in the genitals after pulling his pants down for that purpose.

The officers argued that it was not clear at the time whether this sort of thing was against the law.

That is, they were seeking “qualified immunity,” which provides that an officer accused of violating someone’s statutory or constitutional rights is not liable if the right in question was not “clearly established at the time of the alleged misconduct.” The idea is to preserve officers’ ability to do their jobs without being subject to liability in borderline cases. But as we have discussed before, it has been applied so broadly that officers have been let off the hook for some pretty outrageous things, just because a court had not yet specifically held that those specific things weren’t okay. You know, like … torture. See “Would the Last Civil Right in America Please Remember to Close the Door on Its Way Out?” (May 2, 2012). (Wait, you’re telling us it’s actually illegal to waterboard citizens? We had no idea. Okay, well, now we know.) There are plenty of other outrageous examples that support calls for abolishing the doctrine, something the Supreme Court has not recently shown any interest in doing. See District of Columbia v. Wesby, 138 S. Ct. 577 (2018) (reiterating that “clearly established law” must be defined very very narrowly).

So what about pulling a guy’s pants down in Arizona and sticking a Taser into his business, just for grins? I just ran a search and did not find a single prior case specifically holding that this is illegal, so I guess the officers are off the hook? Well, no, or at least not yet.

The man who got tased and his family have sued three officers and the City of Glendale, Arizona, where the officers were employed. The ruling mentioned above was in that civil case. The officers moved for summary judgment, citing qualified immunity, but the court held the facts are sufficiently disputed that a jury will have to decide. The officer who was (allegedly) the main perpetrator is also facing criminal charges, and it isn’t clear whether a court has ruled on a qualified-immunity claim there yet but this certainly does not bode well for that guy.

That’s because, although the judge found a genuine dispute of material fact exists for trial, if these cases don’t end by settlement or plea bargain then the jury will be watching body-cam videos that are pretty shocking—sorry, that use of “shocking” was really not intentional, but it was accurate. This YouTube link, provided by Courthouse News, begins with the relevant body-cam footage, and the videos that follow are reports by ABC15, the local station that broke the story. Those reports include facts that do not help the defendants at all.

The incident happened in 2017, after officers made a traffic stop of a vehicle in a motel parking lot. Although by “traffic stop,” I mean they lied about seeing the car turn into the lot without signaling. That kind of technical violation might justify a stop, but here security-cam footage made it clear the officers could not have seen the car turn because they were a block away in a back alley at the time. (ABC15 provided an amusing clip in which someone shows the Taser enthusiast that footage and he tries to explain it away. He cannot.)

But that was their purported basis for detaining the plaintiffs, who include the man who was tased, his partner (who was driving), and their two young children, who were in the car at the time. The main perpetrator, who has asked to remain nameless but whose name is Matthew Schneider, questioned the man and demanded to see ID. He refused to provide it, despite Schneider’s insistence that he was legally required to do so. That was also a lie. Arizona law requires this only if the person was operating a motor vehicle (he wasn’t) or has been asked by an officer “who has lawfully detained the person based on reasonable suspicion” of a crime (also no).

As you can see in the body-cam footage if you choose to watch it, the man was acting a little squirrelly and didn’t want to get out of the car. The officers claim he was trying to hide and/or reach for something, but you can decide. Within a minute or two the Taser came out, and Schneider applied it a couple of times in order to get the man out of the car. Whether he was failing to comply or had his leg tangled in the shoulder restraint is another disputed fact, but much more tasing followed. But even if you think all that was justified—and again, they have admitted they lied about having probable cause for the detention—Schneider kept tasing the guy after he was handcuffed and lying face down. And at least one of those shots was the aforementioned tasing of the genitals.

According to ABC15, initially no one was disciplined for this, and the department and city blew off its requests for comment. After the reports started to air, the department conducted an internal investigation, after which it suspended Schneider. For three days. (It was his fourth suspension.) But that was it, and prosecutors also declined to charge him. Only after the reports continued and the body-cam footage was released in 2019 did they reopen the case. Schneider is now, finally, a former police officer being charged with aggravated assault, and he’s also one of the defendants in the civil case. (He was allowed to retire on “accidental disability” so he gets to keep his pension.)

Having watched the video a couple of times and also some of the reports, the qualified-immunity question doesn’t seem too difficult. And to its credit, the court refused to dismiss the case on that basis, something that happens all too often. The opinion suggests the judge thinks this was a close call, but in any event, he held there are at least some disputed facts that a jury will have to resolve.

If the defendants don’t settle and/or plead out, which they really should.

McCain Gets Endorsement From His Former Jailer